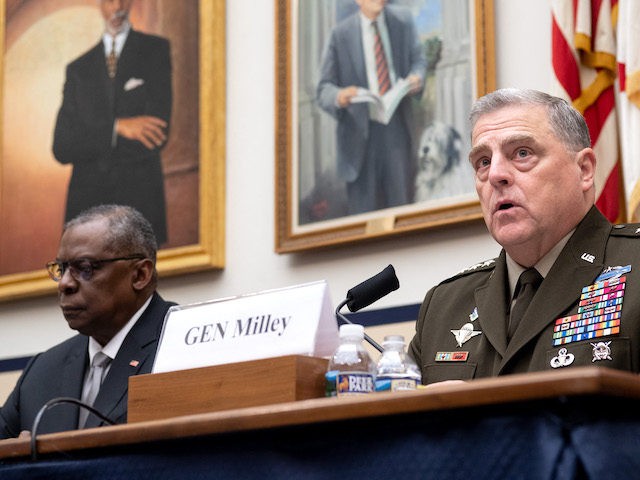 As the U.S. officially pulled out of Afghanistan on Monday, leaving hundreds if not thousands of Americans and Afghan allies behind, nearly 90 retired generals and admirals signed an open letter calling for Defense Secretary Lloyd Austin and Joint Chiefs Chairman Gen. Mark Milley to resign.

The letter, published by Flag Officers 4 America, argues that Austin and Milley either did not do enough to persuade President Joe Biden away from a hasty withdrawal from Afghanistan or should have resigned in protest if the president insisted on his plan despite their pleas to the contrary:https://56389804aab06a18608a6711ac4b77e3.safeframe.googlesyndication.com/safeframe/1-0-38/html/container.html

As the principal military advisors to the Commander In Chief (CINC)/President, the SECDEF and CJCS were the two top military officials in a position to recommend against the dangerous withdrawal in the strongest possible terms. If they did everything within their authority to stop the hasty withdrawal and the President did not accept their recommendations, then knowing the disastrous consequences looming, the retired flag officer signers believe these top military advisors should have resigned as a matter of conscience and public statement.

With the credibility of the United States in tatters, the letter lamented that the consequences of Afghanistan will  “reverberate for decades”:

The consequences of this disaster are enormous and will reverberate for decades beginning with the safety of Americans and Afghans who are unable to move safely to evacuation points; therefore, being de facto hostages of the Taliban. The death and torture of Afghans has already begun and will result in a human tragedy of major proportions. In addition, the loss of billions of dollars in our advanced military equipment and supplies falling into the hands of our enemies is catastrophic. The damage to the reputation of the United States is indescribable. We will be seen for many years as an unreliable partner in any multinational agreement or operation. Trust in the United States is irreparably damaged.

Moreover, now our adversaries are emboldened to move against America due to the weakness displayed in Afghanistan. China benefits the most followed by Russia, Pakistan, Iran, North Korea and others. Terrorists around the world are energized and can pass freely into our Country through our open border with Mexico and among the inadequately vetted Afghan refugees.

The letter concludes by calling for Austin and Milley to resign in the name of “holding those in charge responsible and accountable for their actions or inactions.”

“There must be accountability at all levels for this tragic and avoidable debacle,” it concluded.

During a press conference on Monday, Commander of U.S. Central Command Gen. Kenneth McKenzie confirmed that Americans were left behind in Afghanistan.

“There’s a lot of heartbreak associated with this departure,” said McKenzie. “We did not get everybody out that we wanted to get out.”