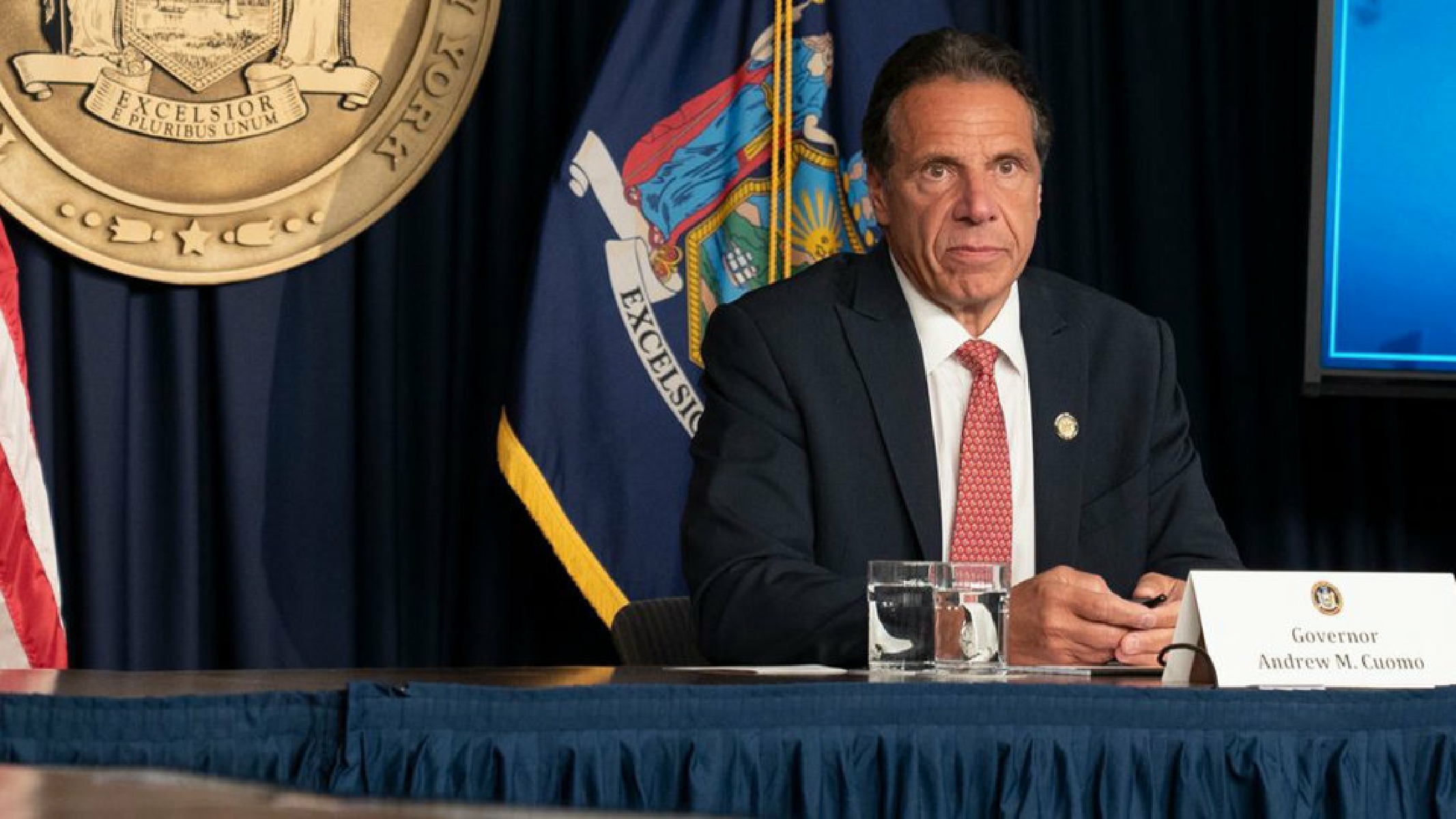 Prosecutors in Manhattan, Nassau and Westchester counties joined the Albany County district attorney in saying they had requested evidence made public on Tuesday in a 165- page report by Attorney General Letitia James.

The report said Mr. Cuomo, a 63-year-old Democrat, sexually harassed multiple women who worked for him in violation of state and federal laws. It substantiated allegations of unwanted hugging, kissing and touching from several women in multiple locations.

The governor called the report biased in a Tuesday video, and said he never touched anybody inappropriately. He said he was focused on doing his job as additional allies in politics and organized labor called for his resignation.

The Assembly’s judiciary committee, which is conducting the impeachment inquiry, plans to meet next week and combine Ms. James’s report with evidence it has already collected, members said.

Mr. Cuomo spent Wednesday at the Executive Mansion in Albany talking with his closest advisers preparing for a public event that would further respond to the charges, according to several people familiar with the matter. The event never happened because the governor’s team couldn’t settle on an exact message or format, the people said.

Rich Azzopardi, a spokesman for the governor, declined to comment and referred to Mr. Cuomo’s statement on Tuesday.

New York State Democratic Committee Chairman Jay Jacobs said he spoke with Mr. Cuomo on Tuesday and Wednesday to urge him to resign. When the governor said he was planning a rebuttal, Mr. Jacobs said he decided to issue a statement to the party’s general mailing list, saying he believed the women and urging the governor to step down immediately.

In 2010, Mr. Jacobs played a similar role in urging then-Gov. David Paterson not to seek a full term. Mr. Paterson heeded his counsel and suspended his campaign amid reports that he contacted a woman pursuing domestic violence charges against a close aide.

“The governor has lost his ability to govern, both practically and morally,” said Mr. Jacobs, who has stood by the governor. “The party and this state will not be well served by a long, protracted removal process designed only to delay what is now, clearly, inevitable.”

The Assembly’s Democratic lawmakers said there was a general consensus during a three-hour conversation after the report came out that Mr. Cuomo was no longer fit to stay in office. Several legislators who had previously stopped short of calling for the governor to step down did so in public, including Assembly Speaker Carl Heastie, a Democrat from the Bronx.

“It is abundantly clear to me that the governor has lost the confidence of the Assembly Democratic majority and that he can no longer remain in office,” Mr. Heastie, who controls legislative activity in the Assembly, said in a statement. He said the impeachment inquiry would conclude as quickly as possible.

The 150-member Assembly, where Democrats outnumber Republicans by more than two to one, would need to vote on impeachment articles. If approved, according to the New York State Constitution, Mr. Cuomo would be stripped of his powers before an impeachment trial begins in front of state senators and the state’s top judges. Lt. Gov. Kathy Hochul would become acting governor and would be the first woman to serve as the state’s chief executive.

More than 50 Republican and Democratic senators have now said the governor should resign. A Senate official said there were currently enough votes to convict Mr. Cuomo if the Assembly approved impeachment articles.

Assemblyman Michael Montesano, the ranking Republican member of the judiciary committee, said he expected it would take the committee at least 30 days to complete its work. Two other Democratic committee members echoed this time frame.

“We can’t let the emotions drive us. We have a legal process to do,” Mr. Montesano said. “If it isn’t done the right way, he walks.”

Democrats control both houses of the New York legislature as well as all statewide offices. While Republicans and some Democrats began calling for Mr. Cuomo’s impeachment in March, other Democrats, including Mr. Heastie, had said they wanted to give the governor due process and allow Ms. James to complete her investigation.

Ms. James’s report detailed allegations of sexual harassment by 11 women, most of them current or former state employees, who said Mr. Cuomo made inappropriate comments and made them uncomfortable in work settings. The report said Mr. Cuomo and his aides retaliated against one woman who publicly accused the governor of harassment.

The actions violated state and federal sexual-harassment laws, the report said, and prosecutors in four counties have begun related inquiries.

A spokesman for Manhattan District Attorney Cyrus Vance Jr. said that his office had requested investigative materials in the report pertaining to incidents in Manhattan.

These include a time Mr. Cuomo allegedly touched several parts of a state trooper’s body at his New York City office and another incident when the report says Mr. Cuomo grabbed a state employee’s buttocks twice at a Manhattan event, according to a letter written by the prosecutors.

Westchester District Attorney Mimi Rocah requested investigative materials related to one of the women in the report, dubbed Trooper #1, and any other conduct that happened in Westchester County.

“I believe it is appropriate for my Office to conduct a further inquiry to determine if any of the reported conduct that is alleged to have occurred in Westchester County is criminal in nature,” Ms. Rocah wrote in a letter to Ms. James.

The report says that Mr. Cuomo kissed the state trooper on her cheek outside the Westchester residence of his former girlfriend. Mr. Cuomo testified that he may have kissed the trooper on a separate occasion, at a Christmas party, according to the report.

Mr. Cuomo said he would continue with his work in office even as prominent Democrats including President Biden, a onetime ally, called for his resignation. Major labor groups—whose leaders had attended a fundraiser for the governor one month ago—issued statements saying they could no longer support Mr. Cuomo.

Mr. Azzopardi declined to comment on Mr. Heastie’s statement, the Assembly’s potential action or the loss of support from labor leaders.

The Assembly also is investigating the state’s response to the coronavirus in nursing homes—including the withholding of data about Covid-related deaths—as well as the use of state resources to produce Mr. Cuomo’s Covid-19 memoir, for which he expects to be paid $5.1 million.

State officials have said their nursing-home policies were crafted to preserve hospital capacity at the height of the pandemic, and data were held back to ensure accuracy. Mr. Azzopardi has said some state officials volunteered to work on the governor’s book and that the use of any other resources was incidental.

Mr. Montesano said he wanted a potential impeachment to include articles based on both of those topics as well as the sexual harassment allegations.

Mr. Cuomo would then be tried in an impeachment court composed of members of the 63-seat state Senate as well as judges of the seven-member Court of Appeals. A trial must begin within 30 to 60 days of a state Assembly impeachment vote.

A two-thirds vote of the impeachment court is required for a conviction, which would remove the governor from office. No New York governor has been removed since William Sulzer in 1913.

Meanwhile, more Democratic officials who were previously supporters called for the governor to resign, including a joint statement from the governors of Pennsylvania, New Jersey, Connecticut and Rhode Island.

Assemblywoman Amy Paulin, a Democrat from Westchester County, said she hoped the report would be a wake-up call for Mr. Cuomo and that he would step down rather than face impeachment.

“Perhaps when he sees we’re all serious—and when the articles of impeachment are right in front of his face—he’ll realize it’s time,” she said. “Nixon didn’t resign right away.”