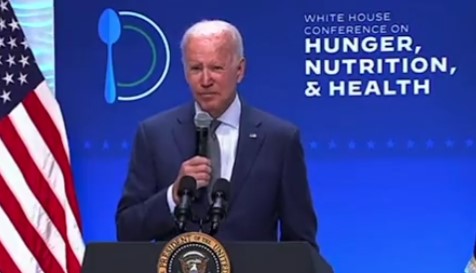 With November’s midterm elections less than six weeks away, President Biden is aiming to boost his party as Democrats try to defend their razor-thin majorities in Congress and strive to pick up ground in the battle for the states.

“We’ve got to win. We have got to win,” the president said to cheers from a crowd of supporters on Wednesday night.

However, Biden’s comments did not come on the campaign trail.

Instead, the president was in the nation’s capital, headlining a fundraising reception for the Democratic Governors Association.

With his approval ratings rebounding but still in negative territory, Biden is campaigning far from the key swing states where the battle for the House and Senate is playing out, and instead is stumping from the White House, using the power of the bully pulpit, and filling a regular role for presidents – as fundraiser in chief for his party.

It is a different role for a politician who for decades has been a road warrior for Democrats on the campaign trail. The then-former vice president crisscrossed the country for Democrats during the 2018 midterms, as his party stormed back to win the House majority. Biden’s current schedule sits in stark contrast with his predecessor in the White House, as former President Trump teams up at rallies on a near weekly basis with Republicans running in crucial midterm contests.

The president headlined a Democratic National Committee rally in blue state Maryland last month and traveled to the crucial battlegrounds of Wisconsin and Pennsylvania on Labor Day, teaming up with Democratic incumbents and candidates at a pair of campaign style events. He blasted Republicans during a prime-time speech outside of Independence Hall in Philadelphia at the beginning of the month.

However, a DNC rally Biden was supposed to headline this week in Florida was canceled as Hurricane Ian smashed into the Sunshine State. Additionally, most of Biden’s time on the campaign circuit has been relegated to speaking at fundraisers, helping his party raise the money needed to compete in the midterms.

“Thanks in a large part to engagement from President Biden, the DNC has raised over $107 million so far this year – the most at this point in any year. This is also the DNC’s best midterm year for grassroots fundraising ever. This overwhelming show of support reflects the broad level of excitement and support for President Biden’s agenda,” a party official told Fox News.

The fundraising has allowed the DNC to invest at least $70 million in the states this cycle, a major boost from their investments during the 2018 midterms.

Democrats also argue that Biden’s already made a major difference in close races, even while treading gingerly on the campaign trail. They point to the slew of high-profile legislative victories for congressional Democrats and the president during the late summer – policy wins that strategists say have given Democratic incumbents plenty of ammunition as they fight to win re-election.

“The president understands the politics of these races vary. He wants to do whatever is most helpful to the folks on the ground. And if that means making calls and raising money from Washington, then that’s what he’ll do. But I think in some places if that means flying in and doing the rallies, he’ll do that do,” a strategist in Biden’s political orbit told Fox News. “There’s no ego in it for him. His goal is to elect Democrats up and down the ballot.”

The president has also been slinging arrows at “MAGA Republicans,” whom he argues have embraced “semi-fascism” due to their continued loyalty to Trump, who remains the most popular and influential politician in the GOP. Biden’s aggressive language appears to be a move to alter the midterms narrative from a referendum on the president and congressional Democrats and their record steering the country — amid record inflation, soaring crime, and a border crisis — to a choice election between Biden and Trump and a battle to save democracy…. (Read more)