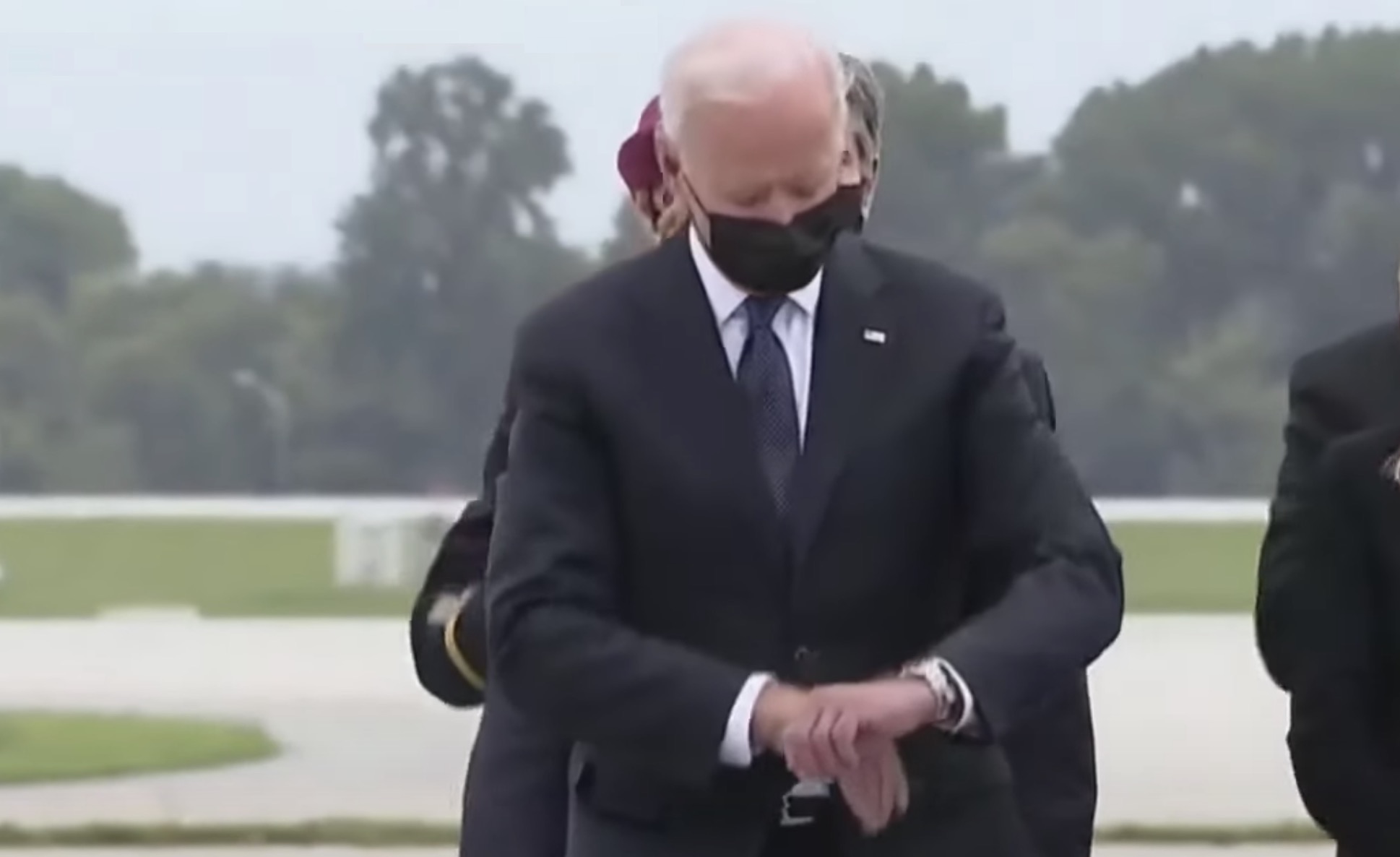 Critics are furious with Joe Biden, and rightfully so.

During a solemn ceremony for the 13 U.S. soldiers who were killed by a suicide bomber attack, Biden appears to be looking at his watch.

Instead of observing the military ritual and honoring the remains of fallen soldiers who died in combat, Biden is presumably checking the time because he has other plans on his mind.

Biden has been under fire lately for spending a significant time on “vacation” in recent weeks instead of remaining in Washington, D.C. to address the disaster and chaos unfolding in Afghanistan.

Biden has been visiting unnamed individuals in Delaware and visiting the presidential retreat at Camp David.

At Dover Air Force Base, Biden was standing as flag-draped coffins were carried off the Air Force C-17 Globemaster plane.

Biden placed his right hand to his chest during the dignified transfer of the remains of our fallen heroes.

Then, at one point, Biden appeared to glance at his watch before putting his arms behind his back.

This move was immediately criticized by veterans and conservatives.

“Apparently our Commander-in-Chief has better things to do than honor the 13 service members who died on his watch?”

“God bless these heroes and their loved ones. They deserved better,” tweeted Jackson, a former White House physician.

Disabled U.S. Army veteran Samuel Williams responded, “Looks like he was being inconvenienced by having to show some respect for these American Heros [sic].”

Columnist Nicholas Fondacaro added, “It’s true. Joe Biden checked his watch during the dignified transfer of the servicemembers (killed) in Afghanistan at the airport.”

“You can see him jerk his left hand to pull the watch out from under his sleeve, then look down at it,” Fondacaro said.

Speaking about the moment, former Gov. Mike Huckabee noted, “Many of us remember Pres Bush 41 checking his watch during a debate and how awful it looked (even though we all felt same way about that debate.)”

“But this is shocking and will be remembered,” Huckabee added.

The 13 soldiers — 11 Marines, one Navy sailor, and one Army soldier — were killed during an ISIS-K suicide bomber attack in Kabul. They had been assisting with the evacuation of Americans and Afghans after the Taliban regained control of the country.