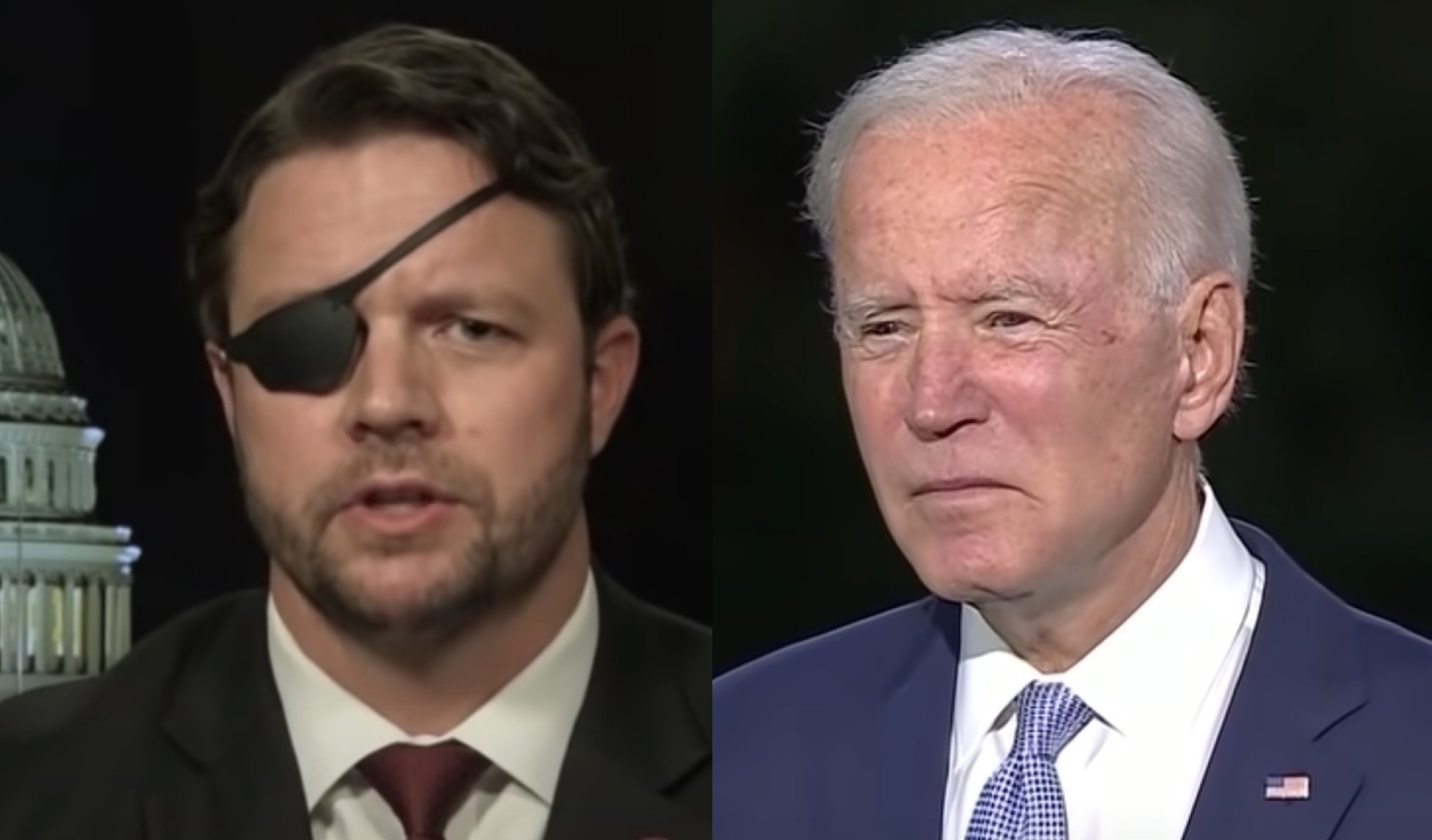 Rep Dan Crenshaw of Texas lost his right eye to an IED blast in Afghanistan on his third deployment.

Now he has a direct message for Joe Biden following the suicide attack that killed 13 U.S. service members and over 60 Afghanistan citizens.

“Fix the mess you created,” Crenshaw said. “Stop running from it. We are still at war.”

Crenshaw added, “You didn’t ‘end the war,’ you just gave the enemy new advantage. Go on offense, establish superiority, and don’t leave until all our citizens and allies are safe.”

Crenshaw penned an op-ed in The Wall Street Journal and criticized those people including Biden who have said “no more endless wars.”

Crenshaw wrote, “They prefer to live in a dream world rather than face the reality that our enemies are ideologically opposed to Western civilization and will gladly stage another 9/11 if they have the opportunity and means.”

“Almost everyone agrees that what’s happening in Afghanistan is an unmitigated disaster. There is no way to whitewash it, and few are trying. The scenes from Kabul speak for themselves, casting shame and embarrassment on the world’s greatest superpower.”

“There is plenty of blame being passed around, including to the ‘neocons,’ the generals and the Afghans themselves,” he said. “But what got us here was the widespread belief that American foreign policy should be dictated by a simple slogan: ‘No more endless wars.’ The current spokesman for that belief is President Biden.”

“Few deny we needed to take action after 9/11, but few understood what our strategy would be after we got there,” Crenshaw added.

He emphasized, “Leaders failed to explain that simply leaving would allow the Taliban to re-emerge and again provide safe haven for terrorists.”

Mr. President, fix the mess you created. Stop running from it. We are still at war. You didn’t “end the war,” you just gave the enemy new advantage. Go on offense, establish superiority, and don’t leave until all our citizens and allies are safe. https://t.co/htKFMQ0Y0k

“With this growing impatience, the case for cutting our losses grew stronger. But it fails to acknowledge trade-offs—and this simple question: If we evacuate Afghanistan, what will happen?” Crenshaw asked. “The ‘no more endless wars’ crowd always refused to answer. They prefer to live in a dream world rather than face the reality that our enemies are ideologically opposed to Western civilization and will gladly stage another 9/11 if they have the opportunity and means. They are at war with us whether or not we are at war with them. Leaving Afghanistan would inevitably create a terrorist safe haven.”

He turned to Biden: “Mr. Biden’s decision was reckless and unnecessary. Policy aside, there wasn’t even political pressure to take such thoughtless action. The facts on the ground didn’t warrant a hasty withdrawal, and intelligence predicted the Taliban would eventually take over. Even worse, this decision was made as the spring fighting season began, all but guaranteeing a Taliban offensive emboldened by the knowledge of an imminent U.S. withdrawal and a collapse of morale by our Afghan allies in uniform and in government.”

America didn’t lose a war, or even end one. We gave up on a strategic national-security interest. We gave up on our Afghan allies, expecting them to stave off a ruthless insurgency without our crucial support, which came at minimal cost to us. This administration’s actions are heartless, its justifications nonsensical. The consequences are dire for innocent Afghans and for America’s prestige. Twenty years after 9/11, I pray they don’t become equally dire for Americans at home.