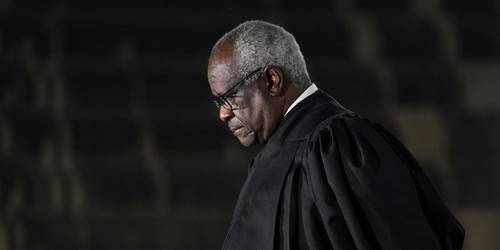 On Sunday, a spokesperson for the Supreme Court shared that Justice Clarence Thomas had been hospitalized last Friday with an infection and was being treated with antibiotics. While the statement shared that he “expects to be released from the hospital in a day or two,” we don’t know if he remains there still. That hasn’t stopped the attacks from coming in against the justice and his wife, Ginni Thomas, which includes calls for impeaching the justice.

“Ginni Thomas” has been trending on Thursday night, as has disbarred attorney “Sidney Powell,” in light of news reports that Thomas was in touch with Mark Meadows, who was then President Donald Trump’s chief of staff on the day of the January 6, 2021 Capitol riot.

This is according to reports from The Washington Post, as well as CBS News, which had access to text messages.

From Bob Woodward and Robert Costa at the Washington Post:

Virginia Thomas, a conservative activist married to Supreme Court Justice Clarence Thomas, repeatedly pressed White House Chief of Staff Mark Meadows to pursue unrelenting efforts to overturn the 2020 presidential election in a series of urgent text exchanges in the critical weeks after the vote, according to copies of the messages obtained by The Washington Post and CBS News.

The messages — 29 in all — reveal an extraordinary pipeline between Virginia Thomas, who goes by Ginni, and President Donald Trump’s top aide during a period when Trump and his allies were vowing to go to the Supreme Court in an effort to negate the election results.

The messages, which do not directly reference Justice Thomas or the Supreme Court, show for the first time how Ginni Thomas used her access to Trump’s inner circle to promote and seek to guide the president’s strategy to overturn the election results — and how receptive and grateful Meadows said he was to receive her advice. Among Thomas’s stated goals in the messages was for lawyer Sidney Powell, who promoted incendiary and unsupported claims about the election, to be “the lead and the face” of Trump’s legal team.

Leftist groups and their allies in the mainstream media have made the connection between Ginni Thomas and her husband, offering that this points to “corruption” and calling for Justice Thomas to be impeached.

Then Sen. Joe Biden served as committee chairman for Thomas’ confirmation hearings while he was being considered for the Supreme Court.

In recent columns for Townhall, Star Parker and Ken Blackwell have addressed the treatment of Ginni and Clarence Thomas.

In other January 6 news, the select committee, which has subpoenaed countless key figures since last September, also on Thursday revealed that they will vote Monday on a report recommending that the U.S. House of Representatives cite for contempt Dan Scavino, Trump’s deputy chief of staff for communications, as well as Peter Navarro, who was a trade advisor for the former president.

The select committee has already sought and gotten contempt charges for Meadows, as well as former advisor Steve Bannon, the latter who was indicted last November by the Department of Justice.