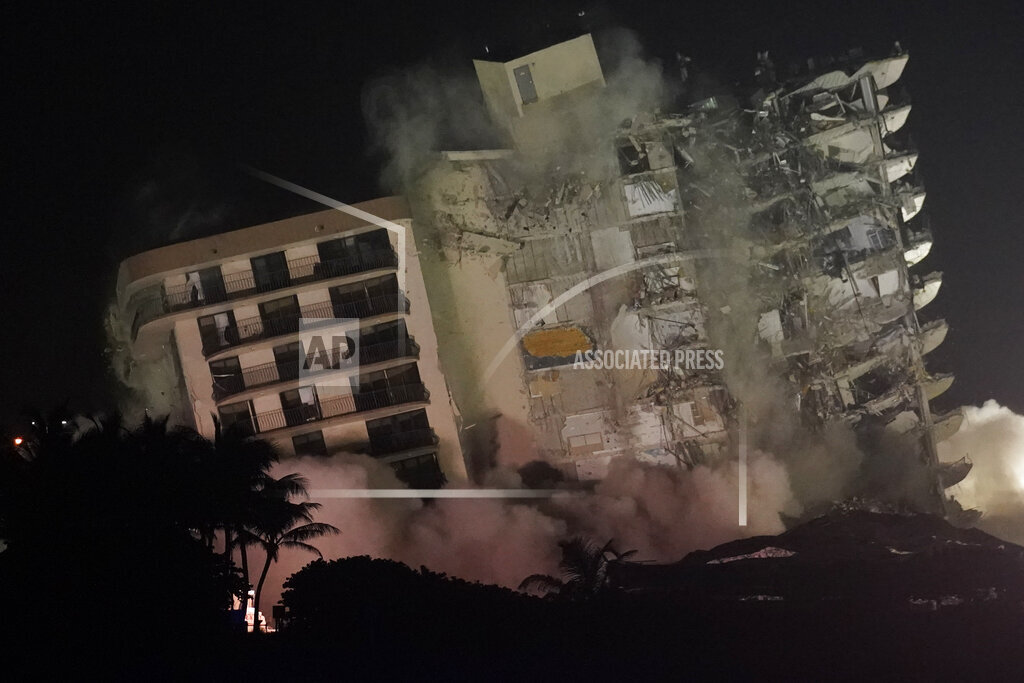 The damaged remaining structure at the Champlain Towers South condo building collapses in a controlled demolition, Sunday, July 4, 2021, in Surfside, Fla. The decision to demolish the Surfside building came after concerns mounted that the damaged structure was at risk of falling, endangering the crews below and preventing them from operating in some areas.(AP Photo/Lynne Sladky)

SURFSIDE, Fla. (AP) — Demolition crews set off explosives late Sunday that brought down the damaged remaining portion of a collapsed South Florida condo building, a key step to resuming the search for victims as rescuers seek access to new areas of the rubble.

A loud rat-at-tat of explosions echoed from the structure just before 10:30 p.m. Then the building began to fall, one floor after another, cascading into an explosion of dust. Plumes billowed into the air, as crowds watched the scene from afar.Miami-Dade County Mayor Daniella Levine Cava told the Associated Press after the demolition that crews had been given the all-clear to resume their search-and-rescue mission to locate the 121 people believed to be missing under a wing of the Champlain Tower South that collapsed June 24. So far, rescuers have recovered the remains of 24 people. No one has been rescued alive since the first hours after the collapse.On Sunday, Miami-Dade police identified David Epstein, 58, as one of the two dozen people known to have perished in the fallen tower. His remains were recovered Friday.The demolition went “exactly as planned,” she said. “It was picture perfect. Exactly what we were told would happen.”Crews were to begin clearing some of the new debris so rescuers could start making their way into parts of the underground garage that is of particular interest. Once there, they were hoping to get a clearer picture of voids that may exist in the rubble and could possibly harbor survivors.Levine Cava expressed relief that the search for victims can now continue, after being suspended on Saturday so workers could begin rigging the damaged but still-upright portion of the the partly-collapsed tower with explosives — a precarious operation that could have caused the structure to fail.“I feel relief because this building was unstable. The building was hampering our search efforts,” Levine Cava said.Rescuers are hoping the demolition will give them access for the first time to parts of the garage area that are a focus of interest. Once a new pathway into the initial rubble is secure, “we will go back to the debris pile, and we’ll begin our search and rescue efforts,” Miami-Dade Fire Chief Albert Cominsky said.The decision to demolish the remnants of the Surfside building came after concerns mounted that the damaged structure was at risk of falling, endangering the crews below and preventing them from operating in some areas. Parts of the remaining building shifted on Thursday, prompting a 15-hour suspension in the work. An approaching storm also added urgency to the concerns.“I truly believe … that the family members recognize and appreciate that we are proceeding in the best possible fashion to allow us to do the search that we need to do,” Levine Cava said.Residents in the area were told to stay inside until two hours after the blast to avoid the dust raised by the implosion. Local authorities had gone door-to-door to advise them of the timing, and to ask them to keep windows closed.Approaching Tropical Storm Elsa has added urgency to the demolition plans with forecasts suggesting there could be strong winds in the area by Monday. President Joe Biden declared a state of emergency in Florida because of the storm, making federal aid possible.The latest forecasts have moved the storm westward, mostly sparing South Florida, but National Hurricane Center meteorologist Robert Molleda said the area could still feel effects.“We’re expecting primarily tropical storm force gusts,” Molleda said, referring to gusts above 40 mph (64 kph).The method used for Sunday night’s demolition is called “energetic felling,” which uses small detonation devices and relies on the force of gravity. Levine Cava, speaking ahead of the demolition, said that should bring the building down in place, containing the collapse to the immediate surroundings so as to minimally disturb the existing mound of debris — where scores of people are believed to be trapped.Officials used tarps to visually mark the search area, in case new debris scatters unexpectedly.State officials said they hired the BG Group, a general contractor based in Delray Beach, Florida, to lead the demolition. They did not immediately respond to an inquiry about how the firm was selected, but a contract for the projects calls for the state to pay the company $935,000.A spokesperson for the state’s Division of Emergency Management said the company is subcontracting with Maryland-based Controlled Demolition Inc., which experts say is among only a handful of companies in the U.S. that demolishes structures using explosives. The company was supposed to place explosives on the basement and lobby levels of the still-standing structure, according to the contract for the work.CDI is “probably one of the best” in the industry, said Steve Schwartz, a member of the National Demolition Association’s board of directors. He described the company’s president and owner, Mark Loizeaux, as “cool, calm and collected.”In implosions — using explosives to have a building fall in on itself — the charges are generally set off in rapid succession over a matter of seconds, said Scott Homrich, who heads the National Demolition Association and runs his own demolition company in Detroit, Michigan. Setting the explosives off at intervals serves to break up the building at the same time it’s coming down.Officials acknowledged that the tragedy was continuing to unfold during the July 4th holiday.“This July 4 we’re reminded that patriotism isn’t just about loyalty to country,” said Levine Cava. “It’s about loyalty to one another — to our communities, to those in need whose names or stories we may not know ever, but to whom we are connected by compassion and by resilience.”