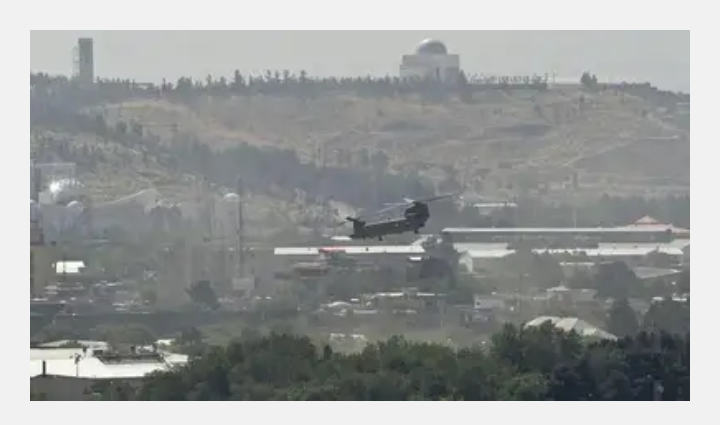 President Joe Biden’s failure in Afghanistan was put on prominent display Sunday when American Chinook helicopters were seen flying over the Afghanistan capital city of Kabul, transporting Americans from the U.S. Embassy to the city’s airport.

The stunning visual drew countless comparisons to the infamous withdrawal in 1975 of Americans from the U.S. Embassy in Saigon. Worse yet, Communist China seized on the moment to mock America.

Taliban spokesman Zabihullah Mujahid told NBC News the terrorist group does not “wish to take revenge” on Afghan citizens, including in the government and military, that opposed them. Mujahid claimed such people would be “forgiven” by the terrorist group.

Still, the group is demanding an unconditional surrender by the Afghanistan government.

The impending fall of Kabul, and of all Afghanistan, comes after Taliban seized huge swaths of the country in just over a week. As the Associated Press reported, American military assessments earlier indicated “it would be a month before the capital would come under insurgent pressure.”

What was the reaction?

The stunning images of helicopters flying to the U.S. Embassy drew comparisons to the rapid removal of U.S. Embassy workers in Saigon as then-North Vietnamese communist soldiers seized Saigon, the capital city of South Vietnam, in April 1975. PHOTO 1: US diplomat evacuate US from embassy via helicopter as the #Taliban enter #Kabul from all sides.… https://t.co/xwaafUsT1M

Shiwei also mocked Biden, noting that he was a sitting U.S. senator in 1975 when Saigon fell.

What did Biden promise?

On July 8 — just a little more than five weeks ago — Biden specifically promised that Kabul would not become the new Saigon, and that the world would not see American helicopters rescuing American workers from the U.S. Embassy in Kabul.

Biden’s declaration was made in response to a question from a reporter who asked Biden if he saw “parallels between this withdrawal and what happened in Vietnam,” noting that “some Vietnamese veterans see echoes of their experience in this withdrawal in Afghanistan.”

“The Taliban is not the south— the North Vietnamese army. They’re not remotely comparable in terms of capability. There’s going to be no circumstance where you see people being lifted off the roof of a embassy of the United States from Afghanistan,” Biden promised. “It is not at all comparable.”