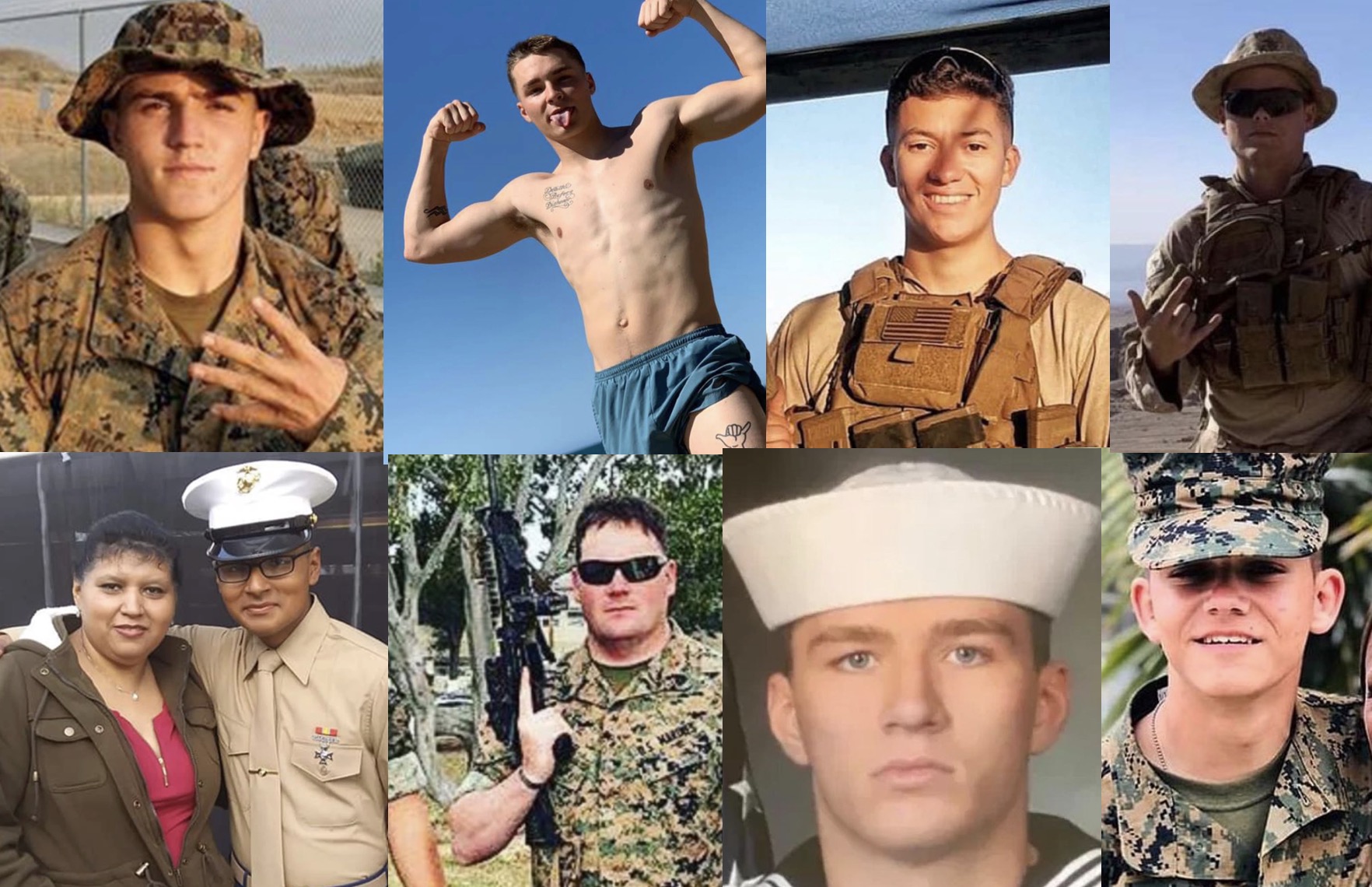 The identities of the 13 US service members who were killed by an ISIS-K suicide bomber outside the Kabul airport are beginning to emerge.

Please note: Some identities have yet to be disclosed while the military still works to inform their families.

Most of them were either 20 years old or in their early twenties.

Here are some of their names, pictures and thier story.

Soviak was a Navy hospital corpsman from Berlin Heights, Ohio. He graduated from Edison High School in Milan in 2017.

Soviak’s older sister and goes by Marilyn Soviak said, “He was a f–king medic. there to help people. and now he is gone and my family will never be the same. there is a large Maxton sized hole that will never be filled.”

“I’ve never been one for politics and i’m not going to start now. What I will say is that my beautiful, intelligent, beat-to-the-sound of his own drum, annoying, charming baby brother was killed yesterday helping to save lives,” the sister wrote.

“[H]e was just a kid. [W]e are sending kids over there to die. kids with families that now have holes just like ours.”

Soviak’s family released a statement which said he was “wonderful son who loved his family, his community, and was proud to serve in the US Navy.”

One day prior to Kareem Nikoui’s death, he sent his dad a video that showed him talking with Afghan children and giving them candy at the Kabul airport.

Kareem Nikoui’s father was informed of his son’s death by a group of Marines showing up at his door in Norco, California.

“I’m going on about 36 hours, I believe, that I’ve been up and I’m still in shock,” Steve Nikoui told Fox News.

His father railed against Biden and US officials. He said they “sent my son over there as a paper pusher and then had the Taliban outside providing security.”

“I blame my own military leaders … Biden turned his back on him. That’s it.”

David Lee Espinoza was from Texas and leaves behind a brother, mother and stepfather.

Espinoza graduated from Lyndon B. Johnson High School in Laredo and lived in Rio Bravo his entire life.

Rep. Henry Cuellar (D-Texas) said, “Mr. Espinoza, a Laredo Marine killed in Afghanistan, embodied the values of America: grit, dedication, service, and valor. When he joined the military after high school, he did so with the intention of protecting our nation and demonstrating his selfless acts of service.”

“I mourn him and all the fallen heroes in Afghanistan. My heart goes out to the Espinoza family in this extremely difficult time. The brave never die. Mr. Espinoza is a hero.”

McCollum was from Bondurant, Wyoming and he was on his first deployment.

“He was determined to be in infantry … Rylee wanted to be a history teacher and a wrestling coach when he finished serving his country. He’s a tough, kind, loving kid who made an impact on everyone he met. His joke and wit brought so much joy.”

Jared Schmitz was from St. Charles County, Missouri and he was on his first deployment.

The father of Jared Schmitz said his son always dreamed of being a soldier.

“His life meant so much more. I’m so incredibly devastated that I won’t be able to see the man that he was very quickly growing into becoming,” Schmitz’s father, Mark Schmitz, told the outlet.

Lopez was a Corporal from California and hoped to follow in his parent’s footsteps and become a sheriff’s deputy one day.

“We are heartbroken to hear this sad news about Hunter, who chose to follow a life of service, selflessness, courage and sacrifice, like his parents. Hunter was a Riverside Sheriff’s Explorer Scout with the Palm Desert Station from September 2014 to August 2017,” a statement reads.

“Hunter was the victim of vicious evil and was killed because he wore a United States [Marine] uniform with love and pride. Our entire community feels the anguish, and we mourn the death of Hunter,” a statement continued.

“Like his parents who serve our community, being a Marine to Hunter wasn’t a job; it was a calling. He loved his family, and as we grieve for Hunter and his fellow Marines taken from us too soon, there are simply no words to express how deeply he will be missed — Semper Fi.”

Marine Cpl. Daegan Page was from Omaha, Neb. and he loved hockey and hunting.

Page joined the Marines out of high school and served with the 2nd Regiment of the 1st Marine Regiment, a unit known as “The Professionals” based at Camp Pendleton in Southern California.

Page hoped to attend trade school after the completion of his Marine service.

Page is survived by his parents, step-parents, grandparents, four siblings and his girlfriend Jessica.

“He was a super-smart, hilarious young man,” Linnae Knauss said of her stepson.

Rep. Tim Burchett (R-Tenn.) said that Ryan “gave his life outside Hamid Karzai International Airport helping people he didn’t know get to safety. This is what true heroism looks like and Ryan’s sacrifice will never be forgotten. The Knauss family is in my prayers.”

“He was a believer,” he said of his grandson, “so we will see him again in God’s heaven.”

Taylor Hoover was from Utah and is described as someone who “lit up a room” when he entered.

“He was the most-loving, giving, understanding person you could ever meet,” his father said.

“They look back on him and say that they’ve learned so much from him,” Hoover said. “One heck of a leader.”

“Doing the hard things that most of us can’t do. He is a hero. Taylor is one of the 13 fallen in Afghanistan. We are wounded. We are bruised. We are angry. We are crushed … but we remain faithful.”

She was a member of the US Marine Corps’ Female Engagement Team.

She was a graduate of Lawrence High School and attended Bridgewater State University.

In May, Rosario was honored by her unit, the Naval Amphibious Force, Task Force 51/5th Marine Expeditionary Brigade, whose members were on the ground aiding in evacuations at the Kabul airport, WCVB reported.

Lawrence Mayor Kendrys Vasquez said he had been in touch with the slain service member’s family “to extend mine and my family’s most sincere condolences and offer all of the aid that my administration can provide as they grieve this great loss.”

“At this time, the family’s most immediate wish is to be given privacy and that their loved one be recognized as the hero that she was,” he said.

He was only four years out of high school when he was killed.

Indiana Rep. Jim Baird said, “I am both proud of his service and deeply saddened by his loss.”

“May we never forget Corporal Sanchez’s name or his heroism to a grateful nation. As the family grieves, I ask fellow Hoosiers to please join me in praying for his family during this incredibly difficult time.”

Indiana Sen. Mike Braun said, “Corporal Sanchez is an American hero and his service and sacrifice will never be forgotten.”