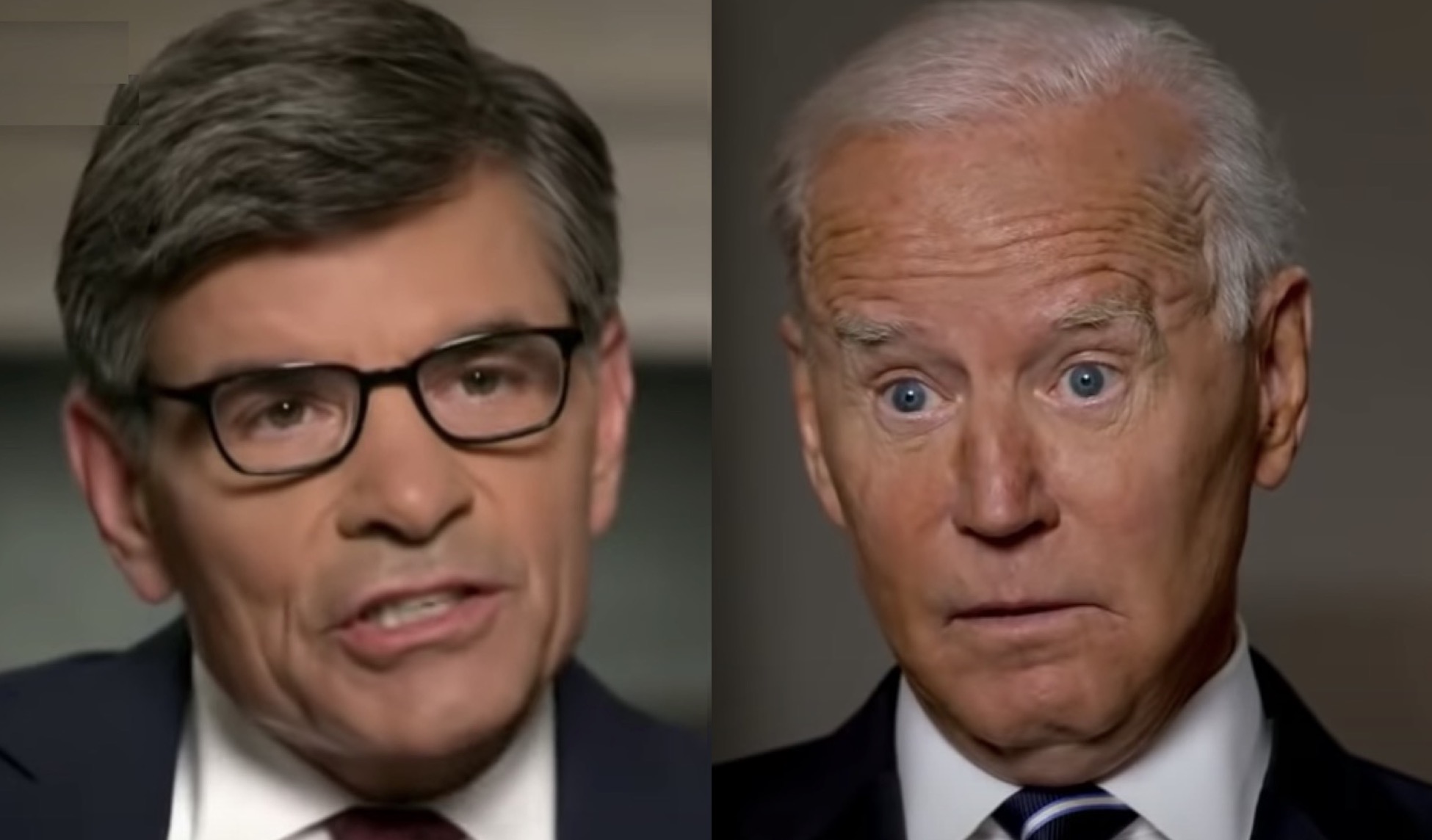 President Donald Trump referred to Joe Biden’s botched withdrawal of U.S. troops from Afghanistan as “the greatest embarrassment in the history of our country.”

It appears even left-leaning networks are beginning to take notice.

CNN released a devastating segment that displayed all of Biden’s broken promises leading up to the Afghanistan disaster.

CNN’s Brianna Keilar”dissected every broken promise on Afghanistan made by Biden on the campaign trail and during his presidency.” She added, “Many of the promises and the predictions and the words of the president and his White House are coming back to haunt them.” You can watch the CNN clip here.

So far, the network has refused to air nearly one thousand words from an interview with Joe Biden.

This news broke after ABC released a published transcript, but only aired a small portion of the footage.

Besides this one interview, Biden has refused to take questions from the press.

As Daily Wire notes, “Biden has avoided answering questions from reporters during two brief sets of remarks that he gave to the media this week and he has spent a significant portion of time during this crisis on vacation in Delaware, where his administration refuses to disclose who he meets with.”

Biden is spending his time on vacation and refusing to take questions from the press while thousands of Americans are reportedly trapped in Afghanistan as the region falls under control of the Taliban.

So what is ABC hiding by refusing to air portions of the interview with Biden?

A closer look into the transcript shows what else Biden has said about Afghanistan:

STEPHANOPOULOS: Let’s get right to it. Back in July, you said a Taliban takeover was highly unlikely. Was the intelligence wrong, or did you downplay it?

BIDEN: I think — there was no consensus. If you go back and look at the intelligence reports, they said that it’s more likely to be sometime by the end of the year. The idea that the tal — and then it goes further on, even as late as August. I think you’re gonna see — the Chairman of the Joint Chiefs of Staff and others speaking about this later today.

STEPHANOPOULOS: I– I think a lot of– a lot of Americans, and a l– even a lot of veterans who served in Afghanistan agree with you on the big, strategic picture. They believe we had to get out. But I wonder how you respond to an Army Special Forces officer, Javier McKay (PH). He did seven tours. He was shot twice. He agrees with you. He says, “We have to cut our losses in Afghanistan.” But he adds, “I just wish we could’ve left with honor.”

BIDEN: Look, that’s like askin’ my deceased son Beau, who spent six months in Kosovo and a year in Iraq as a Navy captain and then major– I mean, as an Army major. And, you know, I’m sure h– he had regrets comin’ out of Afganista– I mean, out of Iraq.

He had regrets to what’s– how– how it’s going. But the idea– what’s the alternative? The alternative is why are we staying in Afghanistan? Why are we there? Don’t you think that the one– you know who’s most disappointed in us getting out? Russia and China. They’d love us to continue to have to–

Here’s more of the transcript:

STEPHANOPOULOS: So for you, that was always priced into the decision?

BIDEN: Yes. Now, exactly what happened– is not priced in. But I knew that they’re gonna have an enormous, enorm– look, one of the things we didn’t know is what the Taliban would do in terms of trying to keep people from getting out, what they would do. What are they doing now? They’re cooperating, letting American citizens get out, American personnel get out, embassies get out, et cetera. But they’re having– we’re having some more difficulty in having those who helped us when we were in there–

STEPHANOPOULOS: And we don’t really know what’s happening outside of Kabul.

STEPHANOPOULOS: We don’t really know what’s happening outside of Kabul.

BIDEN: Well– we do know generically and in some specificity what’s happening outside of Kabul. We don’t know it in great detail. But we do know. And guess what? The Taliban knows if they take on American citizens or American military, we will strike them back like hell won’t have it.

STEPHANOPOULOS: You talked about our adversaries, China and Russia. You already see China telling Taiwan, “See? You can’t count on the Americans.” (LAUGH)

BIDEN: Sh– why wouldn’t China say that? Look, George, the idea that w– there’s a fundamental difference between– between Taiwan, South Korea, NATO. We are in a situation where they are in– entities we’ve made agreements with based on not a civil war they’re having on that island or in South Korea, but on an agreement where they have a unity government that, in fact, is trying to keep bad guys from doin’ bad things to them.

We have made– kept every commitment. We made a sacred commitment to Article Five that if in fact anyone were to invade or take action against our NATO allies, we would respond. Same with Japan, same with South Korea, same with– Taiwan. It’s not even comparable to talk about that.

STEPHANOPOULOS: Yeah, but those–

BIDEN: It’s not comparable to t–

STEPHANOPOULOS: –who say, “Look, America cannot be trusted now, America does not keep its promises–“

BIDEN: Who– who’s gonna say that? Look, before I made this decision, I met with all our allies, our NATO allies in Europe. They agreed. We should be getting out.

STEPHANOPOULOS: Did they have a choice?

BIDEN: Sure, they had a choice. Look, the one thing I promise you in private, NATO allies are not quiet. You remember from your old days. They’re not gonna be quiet. And so– and by the way, you know, what we’re gonna be doing is we’re gonna be putting together a group of the G-7, the folks that we work with the most– to– I was on the phone with– with Angela Merkel today. I was on the phone with the British prime minister. I’m gonna be talking to Macron in France to make sure we have a coherent view of how we’re gonna deal from this point on.

STEPHANOPOULOS: How about the threat to the United States? Most intelligence analysis has predicted that Al Qaeda would come back 18 to 24 months after a withdrawal of American troops. Is that analysis now being revised? Could it be sooner?

STEPHANOPOULOS: And you’re confident we’re gonna have that in Afghanistan?

BIDEN: Yeah. I’m confident we’re gonna have the overriding capability, yes. Look, George, it’s like asking me, you know, am I confident that people are gonna act even remotely rationally. Here’s the deal. The deal is the threat from Al Qaeda and their associate organizations is greater in other parts of the world to the United States than it is from Afghanistan.

STEPHANOPOULOS: And that tells you that you’re– it’s safe to leave?

BIDEN: No. That tells me that– my dad used to have an expression, George. If everything’s equally important to you, nothing’s important to you. We should be focusing on where the threat is the greatest. And the threat— the idea– we can continue to spend $1 trillion and have tens of thousands of American forces in Afghanistan when we have what’s going on around the world, in the Middle East and North Africa and west– I mean, excuse me– yeah, North Africa and Western Africa. The idea we can do that and ignore those– those looming problems, growing problems, is not– not rational.

STEPHANOPOULOS: It sounds like you think we shoulda gotten out a long time ago–

STEPHANOPOULOS: –and– and accept the idea that it was gonna be messy no matter what.

BIDEN: Well, by the– what would be messy?

BIDEN: If we had gotten out a long time ago– getting out would be messy no matter when it occurred. I ask you, you want me to stay, you want us to stay and send your kids back to Afghanistan? How about it? Are you g– if you had a son or daughter, would you send them in Afghanistan now? Or later?

STEPHANOPOULOS: Would be hard, but a lot of families have done it.

BIDEN: They’ve done it because, in fact, there was a circumstance that was different when we started. We were there for two reasons, George. And we accomplished both ten years ago. We got Osama bin Laden. As I said and got criticized for saying at the time, we’re gonna follow him to the gates of hell. Hell, we did–

STEPHANOPOULOS: How will history judge the United States’ experience in Afghanistan?

BIDEN: One that we overextended what we needed to do to deal with our national interest. That’s like my sayin’ they– they’re– they– they b– b– the border of Tajikistan– and– other– what– does it matter? Are we gonna go to war because of what’s goin’ on in Tajikistan? What do you think?

Tell me what– where in that isolated country that has never, never, never in all of history been united, all the way back to Alexander the Great, straight through the British Empire and the Russians, what is the idea? Are we gonna s– continue to lose thousands of Americans to injury and death to try to unite that country? What do you think? I think not.

I think the American people are with me. And when you unite that country, what do you have? They’re surrounded by Russia in the north or the Stans in the north. You have– to the west, they have Iran. To the south, they have Pakistan, who’s supporting them. And to the– and– actually, the east, they have Pakistan and China. Tell me. Tell me. Is that worth our national interest to continue to spend another $1 trillion and lose thousands more American lives? For what?