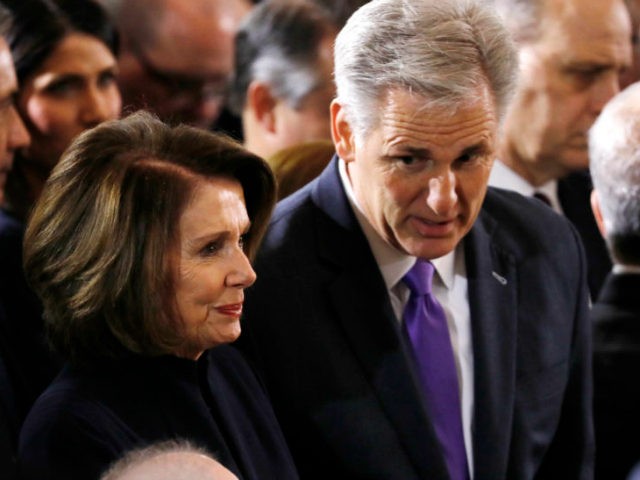 House Minority Leader Kevin McCarthy (R-CA) said Wednesday he will strip any Republican member of committee assignments for serving on House Speaker Nancy Pelosi’s (D-CA) January 6 committee.
“During a closed-door meeting with freshman House Republicans,” McCarthy stood opposed to Republicans accepting an appointment from Speaker Nancy Pelosi to the Jan. 6 select committee.” If they do, “they better be ready to get all their committee assignments from her,” Punchbowl News reported.

“Republicans, McCarthy said, get their committee assignments from Republicans — not from Democrats. Or else,” the report continued.
The only Republicans rumored to be considering such an appointment were Reps. Liz Cheney (R-WY) and Adam Kinzinger (R-IL), who voted to create a committee to investigate, “although both of them may be out of Congress by 2023,” Punchbowl estimates:

NEW in @PunchbowlNews this AM:@GOPLeader told a group of House Republicans Wednesday that if they accept @SpeakerPelosi’s nomination to the Jan. 6 select committee, they can expect to get all their committee assignments from her.
Subscribe: https://t.co/dg451HnwW3 pic.twitter.com/pfAyXWxnsI
— Jake Sherman (@JakeSherman) July 1, 2021

On June 24 during a weekly press conference, Pelosi announced a plan to create a partisan January 6 investigation via a select committee while resisting calls for a probe into the origins of the coronavirus.
The partisan committee is charged to “investigate and report on the facts and the causes of the attack and it will report recommendations for the prevention of any future attack.”
Pelosi and Democrat leaders previously attempted to create a congressionally approved January 6 Commission to investigate the protests and riots that occurred that day, but Senate Republicans blocked the legislation in May.
The defeat of the commission was brought about because McCarthy asserted Democrats were not negotiating the particulars of the commission in good faith with Republicans.
But while Pelosi seeks to investigate January 6, she continues to ignore Republicans’ demands to assemble a committee or commission to probe the origins of coronavirus, which 60 percent of Americans believe came from the Wuhan lab in China.