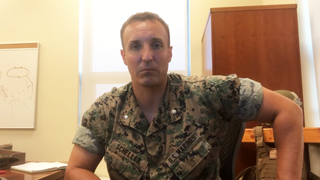 The U.S. Marine who was relieved of his command after criticizing his superiors over their handling of Afghanistan has submitted his resignation, citing a “lack of trust and confidence” in military leaders.

“I tender my resignation of commission in the U.S. Marine Corps, per the reference, and request an effective date of 11 September 2021,” Lt. Col. Stuart Scheller said in his resignation letter, which is dated Tuesday.

“My reason for submitting a letter of resignation: A lack of trust and confidence in your ability to lead.”

The letter comes after a viral video where Scheller, a 17-year Marine, criticized top military brass following the attack in Kabul that left 13 U.S. service members killed from an ISIS suicide bombing.

“I’m not saying we need to be in Afghanistan forever, but I am saying, did any of you throw your rank on the table and say, ‘Hey, it’s a bad idea to evacuate Bagram Airfield, a strategic airbase, before we evacuate everyone’?” Scheller said last Thursday in the video. “Did anyone do that? And when you didn’t think to do that, did anyone raise their hand and say, ‘We completely messed this up’?”

He was subsequently relieved of his command, but has stuck with his message of accountability in the military.

“The baby boomer’s turn is over,” Scheller told The New York Post this weekend. “I demand accountability, at all levels. If we don’t get it, I’m bringing it.”

He has also said that his criticisms potentially cost him a $2 million pension, but that he doesn’t “need a single dollar.”

“I don’t need a single dollar. I just need every single person that’s willing to go back outside the wire every single day to wear a blue-collar and just go into work every single day and feed their families. Those are the people that I need,” Scheller said. “Follow me and we will bring the whole f—ing system down. I am honorable and you can ask any Marine who served with me for 17 years. I dare you to ask them all and find out what I’m made of. We’re just getting started.”

His comments came ahead of dozens of retired generals and admirals calling for Defense Secretary Lloyd Austin and Chairman of the Joint Chiefs of Staff Gen. Mark Milley to resign, citing “negligence” with their handling of Afghanistan.

President Biden, meanwhile, has come under fierce criticisms for his handling of Afghanistan, most notably after the 13 U.S. service members were killed. He again stirred controversy over the weekend, when he was seen appearing to glance at his watch during the solemn ceremony when the service members’ remains were brought back to the U.S.

Former President Donald Trump ripped Biden for the move, calling it a “disgrace.”

“When he did that yesterday, it was, it was a disgrace. I think the best thing he could do is apologize to the American people and apologize to the world,” Trump said Tuesday morning during an interview on Fox Business’s “Varney & Co.”

Trump added in his interview on Tuesday that the “generals we have representing us on television have made fools out of our country.”