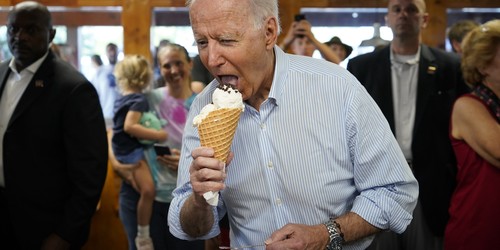 It was a rough one for team Biden. It’s been a trainwreck ever since EVERYONE noticed that this administration was not going to address the collapse of the national government in Afghanistan when the Taliban rolled into Kabul on August 15. Remember Biden was on vacation as was his press secretary, Jen Psaki. For days, there was radio silence. They tried hiding in the basement. You can’t do that anymore, old man. This White House thought it was totally fine to simply not say anything about the disastrous end of our longest war. This comes on top of the thousands of Americans that are now trapped. The memos from the State Department and the Intelligence Community warned about the collapse—all summer long.

Joe is an angry old man who does not like to be questioned. Part of that is due to his arrogance which is inherent in all liberals. The second is the frustration that comes from diminished mental capacity. All of that is evident with this Afghanistan retreat. It’s a disaster. Even CNN cannot protect him, noting that conditions on the ground point to a US plan that was not really a plan at all. Failure is written all over with this withdrawal. The man who said he was going to bring back diplomacy and competence is not showing that here. And his addresses have been ripped to shreds by the entire media establishment. Even the liberal media who has treated this administration with kid gloves cannot polish his words for him. They’re simply not in keeping with reality.

Yesterday, National Security Adviser Jake Sullivan exposed another Biden lie about him not being advised to keep troops on the ground. Well, it was kicked out of him that the Pentagon was pretty much advising that:

This is as close as the Biden Administration has come to admitting that the Pentagon recommended keeping US troops in Afghanistan, a recommendation that has been confirmed by every major newspaper and media org in the country. President Biden recently denied receiving that advice — Ryan Browne (@rabrowne75)

Americans are being beaten by the Taliban. It’s not easy to get to the airport. It’s total pandemonium and Biden is the saying ‘this is fine’ as the house burns around him.

Confirms our reporting from Friday @AlexThomp

Finally, Fox News’ Chris Wallace, who admittedly has not been a favorite host to watch with GOP voters, was quite blunt with Secretary of State Blinken, noting given the breadth of the issues with this exit—does Biden even know what’s going on. His answer was not reassuring (via The Hill):

Speaking with Blinken on “Fox News Sunday,” Wallace pointed out that since the Taliban took Kabul, Biden has said there is no threat of al Qaeda in Afghanistan. Wallace noted that reports from the United Nations have indicated that al Qaeda has a presence in at least 15 of Afghanistan’s 34 provinces.

Wallace also pressed Blinken on Biden’s claim that no allies have criticized the U.S. for how its withdrawal has been handled, pointing to European leaders such as Tom Tugendhat, chairman of British Parliament’s Foreign Affairs Committee, who have lambasted Biden’s remarks and actions in the withdrawal.

Wallace asked Blinken whether Biden is fully aware of what is occurring on the international front.

“Chris, all I can tell you is what I’ve heard. And, again, this is a powerful, emotional time for a lot of allies and partners, as it is for me, as it is for us..”

CHRIS WALLACE: Mr. Secretary, does the president not know what’s going on?

BLINKEN: This is an incredibly emotional time for many of us. — Lucas Tomlinson (@LucasFoxNews)

So, I take that as a ‘no,’ which is fine because I don’t think anyone is confident, deep down, that Joe is all there. He seems to view Afghanistan as an annoyance. He doesn’t care. He’s not engaged. It explains a lot.Matt Vespa contributed to this .