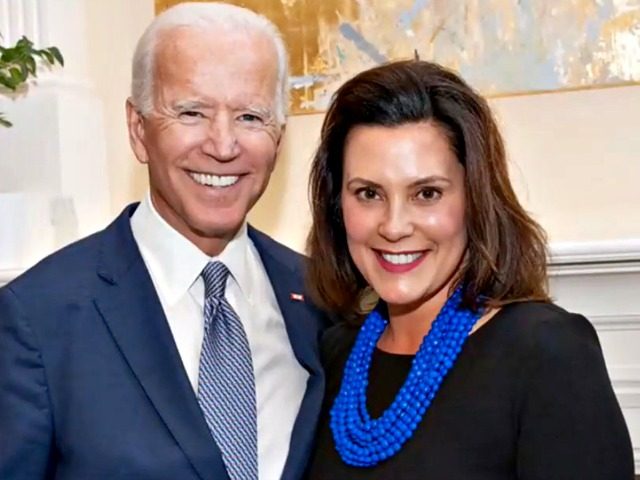 A pair of congressional Republicans from Michigan criticized Friday President Joe Biden’s weekend visit to the state with Gov. Gretchen Whitmer (D).
Whitmer was on Biden’s shortlist for vice president before a number of black activists demanded he pick then-Sen. Kamala Harris.

Biden and Whitmer are scheduled to appear at the National Cherry Festival in Traverse City on Saturday to tout coronavirus vaccines and hear how their crushing response to the pandemic affected businessowners.
U.S. Reps. Jack Bergman and Lisa McClain told reporters that the two have a lot to answer for.
Bergman said it is “a little late” for Whitmer to be visiting his northern Michigan district. “She should have been there a year and a half ago,” he said.

“The governor’s policies for the last year-plus have crushed the economy, crushed the lifestyle, crushed everything in Michigan as a state,” Bergman told reporters, adding her rules made citizens “subservient to her will.”
Bergman deemed the trip a “campaign visit” for a governor running for reelection in 2022 amid falling polling numbers affected by her hypocritical actions and responses to questions related to them.
McClain noted Michigan’s post-pandemic recovery has been “lagging.” A recent study by WalletHub found Michigan with the slowest recovery in the country, largely due to the unending restrictions at the time.
She argued Whitmer followed “political science” during the pandemic, “which is extremely frustrating.”
McClain said Michigan remains in an “economic pandemic,” and she said she hopes Biden and Whitmer will “get out in the community and talk to the businesses in which their decisions and their policies have shut down, crippled, and put out of business.”

“I hope to God they have some answers for these people,” McClain added.
“Gretchen Whitmer’s poor handling of the coronavirus pandemic has not only made her the national posterchild of failed leadership, but her constant games of ‘Joe Biden Says’ has done nothing to shelter Michiganders from the administration’s terrible policies,” Bergman told Breitbart News after the call.
He added, “2022 will be a referendum on the Democrats’ failed leadership and I imagine Gretchen Whitmer will lose her position as a result.”
“Joe Biden couldn’t have picked a better destination to highlight Gretchen Whitmer’s failures and never-ending hypocrisy,” Republican Governors Association spokesman Chris Gustafson said in a statement.
“Whitmer has yet to deliver under the Biden Administration, and her secret weekend getaways and failed leadership are leaving the state behind. Hopefully for Whitmer, President Biden will have a little more sway in getting her boat into the water.”