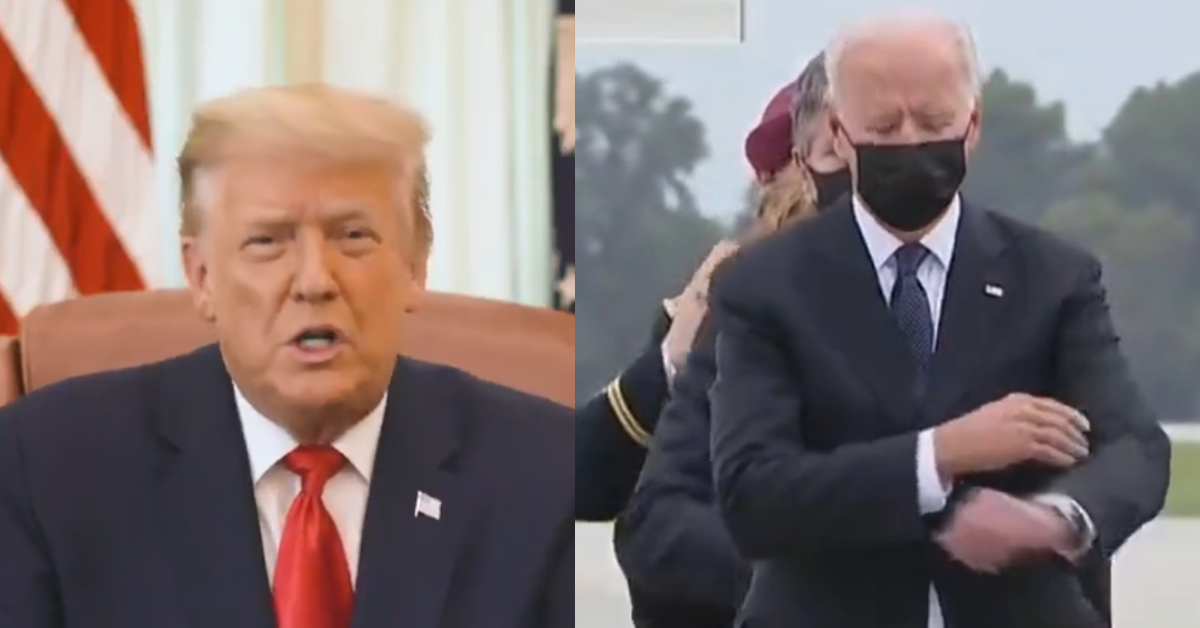 Former President Donald Trump said it was a “disgrace” when Joe Biden was busted looking at his watch while paying respects to the U.S. 13 service members who were killed in Afghanistan.

“When he did that yesterday, it was, it was a disgrace. I think the best thing he could do is apologize to the American people and apologize to the world,” Trump said on Fox Business’s “Varney & Co.”

“When he kept looking at his watch yesterday at Dover with the parents and spouses of people that were killed, the Marines and the Navy sailor that was killed, and he’s looking at his watch, like, ‘Get me the hell out of here. I want to go home, get me out,” Trump said.

“I want to go home.’ I mean how many times did he look at his watch,” Trump said.

“It is a terrible time for our country. I don’t think in all of the years our country has ever been so humiliated. I don’t know what you call it – a military defeat or a psychological defeat, there has never been anything like what’s happened here: You can go back to Jimmy Carter with the hostages,” Trump said.

“That didn’t happen just once. It happened on every single one that came out of that airplane.

“It happened on every single one of them. They would release the salute, and he would look down at his w atch on every last one, all 13, he looked down at his watch.

“As a father, seeing that and the disrespect, and hearing from his former leaders, one of Taylor’s master sergeants said that this was avoidable — that they left them over there.

“They had them over there and let them down, and we can’t have that. It can’t happen ever again,” he said.

“Many of us remember Pres Bush 41 checking his watch during a debate and how awful it looked (even though we all felt same way about that debate.), ” former Arkansas Gov. Mike Huckabee said.

“But this is shocking and will be remembered,” he added.

“Apparently our Commander-in-Chief has better things to do than honor the 13 service members who died on his watch?” former White House doctor Rep. Ronny Jackson said.

“I’m DISGUSTED! God bless these heroes and their loved ones. They deserved better.”

GOLD STAR FATHER DARIN HOOVER, WHOSE SON MARINE STAFF SGT. TAYLOR HOOVER WAS KILLED IN KABUL, ALLEGES THAT PRESIDENT BIDEN LOOKED DOWN AT HIS WATCH WHEN ALL 13 FALLEN SERVICE MEMBERS ARRIVED AT DOVER AIR FORCE BASE:

“THAT HAPPENED ON EVERY SINGLE ONE OF THEM.” PIC.TWITTER.COM/PC83XWNWSX

BIDEN APPEARS TO CHECK HIS WATCH DURING THE DIGNIFIED TRANSFER CEREMONY AT DOVER AIR FORCE BASE. PIC.TWITTER.COM/OMSBEFNMFS