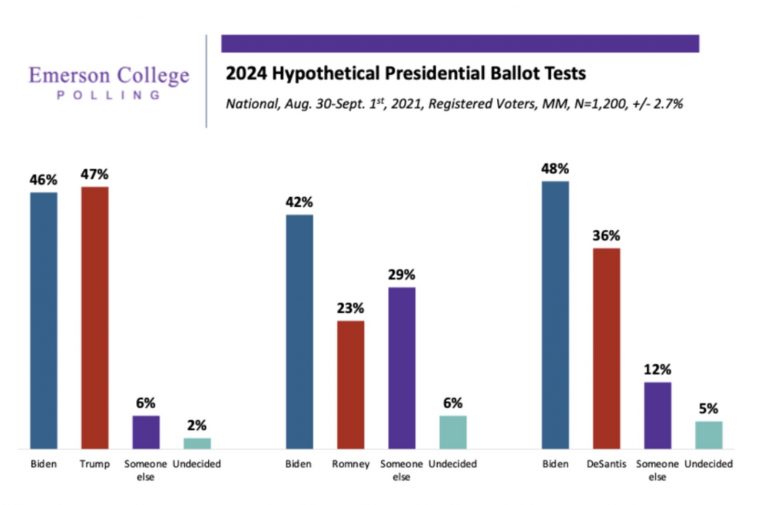 A national Emerson College Poll found that if the two men were to go head-to-head in 2024, Trump would be slightly favored with 47 percent against Biden’s 46 percent.

Biden has split job approval among registered voters, the poll found. It said that around 47 percent disapprove and 46 percent approve of the work he is doing as president. The other 7 percent were undecided.

Of the Republican voters polled, 67 percent said they would vote for Trump in a hypothetical GOP primary with seven other candidates, including Florida Governor Ron DeSantis (the only candidate to reach double-digit support at 10 percent when the former president is in the race) , former Vice President Mike Pence, Texas Senator Ted Cruz and former South Carolina Governor and ex-UN Ambassador Nikki Haley.

When placed head-to-head in a hypothetical 2024 presidential race, Biden is favorite to win against all of the other Republican challengers, including DeSantis.READ MORE

With regards to the 2022 midterms, the poll found that 71 percent of Democrats and 69 of Republicans said they were very likely to vote in the contest.

When Emerson last conducted the poll in February, Biden’s approval rating was 49 percent while disapproval was at 39 percent, with 12 percent on the fence.

Biden’s approval rating has shot down since the United States completed the final stages of its withdrawal from Afghanistan, which was marred by chaotic scenes at the Kabul airport as the U.S. and allies scrambled to evacuate all their citizens and the Afghans who fear Taliban reprisals.

The poll revealed that the majority (68 percent) of Americans believes the U.S. lost the war in Afghanistan, while 32 percent believed the U.S. won. Asked which president bears most of the responsibility for the war in Afghanistan, 49 percent believed it was former Republican President George W. Bush, who originally sent the troops there in 2001. Biden came second with 24 percent, followed by Barack Obama with 18 percent and Trump with 10 percent.

Since he lost the presidential election in November 2020, Trump, a one-term president, has dropped a number of hints that he may try to run again in 2024.

On September 2, the Trump campaign released a political ad citing Biden’s failures with Afghanistan, calling for the release of American hostages in the central Asian country and the return of military equipment, much of it seized by the Taliban from the Afghan national army.

There have also be other hints Trump will run from other GOP allies.

An Undercurrent journalist Lauren Windsor reported in a tweet on Thursday that GOP Rep. Jim Jordan (R-OH) had said Trump would be announcing his campaign to run “any day now.” But a spokesperson for the Ohio lawmaker denied he made those comments about Trump running again in 2024.

A video leaked on Friday to Undercurrent News showed Jordan saying Trump was “about ready to announce” his campaign to run “after all of this craziness in Afghanistan.”

But on Friday, a Trump spokesperson denied that the former president ever told Jordan he was running. The spokesperson also said that an announcement about a 2024 run is not imminent.