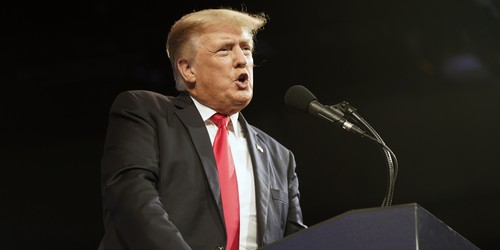 Former President Donald Trump continued with his “Save America” tour on Saturday when appearing in Cullman, Alabama. Predictably, he hit his successor over his failures with Afghanistan.

Many have likened the fall of Kabul to the fall of Saigon in 1975, arguing that the former was actually worse. This is a particularly noteworthy failure of the Biden administration, as President Joe Biden himself was adamant that there was no comparison, during remarks he gave on July 8:

Q    Mr. President, some Vietnamese veterans see echoes of their experience in this withdrawal in Afghanistan.  Do you see any parallels between this withdrawal and what happened in Vietnam, with some people feeling —

THE PRESIDENT:  None whatsoever.  Zero.  What you had is — you had entire brigades breaking through the gates of our embassy — six, if I’m not mistaken.

The Taliban is not the south — the North Vietnamese army. They’re not — they’re not remotely comparable in terms of capability.  There’s going to be no circumstance where you see people being lifted off the roof of a embassy in the — of the United States from Afghanistan.  It is not at all comparable.

The former president offered that “Biden failed totally on the pandemic,” as he also said that “and now he’s overseeing the greatest foreign policy humiliation in the history of the United States of America.” Biden once had strong marks over how he’s handled the pandemic, but, like virtually all other issues, respondents are asked about, across various polls, support for the president on this issue is going down as well.

Trump certainly had more strong words for Biden as he shared his own thoughts. “This is the greatest humiliation I’ve ever seen,” he said, also offering predictions for the legacy of such a disaster. “Biden’s botched exit in Afghanistan is the most astonishing display of gross incompetence by a nation’s leader. Perhaps at any time that anybody’s ever seen. Name another situation.

He also made quite the comparison to Vietnam, saying “Vietnam looks like a master class in strategy compared to Joe Biden’s. Catastrophe. And it didn’t have to happen. All he had to do is leave the soldiers there until everything’s out.”

Trump emphasized a sense of lamentations as to how the situation has turned out. “The scene of those big giant planes taking off with people hanging on the sides and falling off. There will never be anything like that.” Biden has drawn ire from all sides of the aisle for his reaction during an interview with George Stephanopoulos, pointing out that that was “four days ago, five days ago.”

The former president once more conjured the image of helicopters, saying what’s going on in Afghanistan is “worse,” and continuing on. “You remember the helicopters taking off the roofs? This blows it away, not even a contest. This will go down as one of the great military defeats of all time and it did not have to happen that way. This is not a withdrawal. This was a total surrender surrender, surrender, for no reason.”

His lamentations of how it didn’t have to be this way extended to how “then we had a rigged election,” and how Biden “dropped to his knees and he said, come on in and take everything that we have.”

Trump suggested that not only was the withdrawal from Afghanistan “a disgraceful thing” and “the most embarrassing thing that we’ve ever seen in this country,” but he also offered “there’s never been an
embarrassment and the nations of the world. Other nations, “both friend and foe,” Trump said, “are looking at us and saying, what the hell happened so quickly to the United States of America? They can’t believe it.”

There’s also concerns with weapons left behind by the United States falling into the hands of the Taliban. “He surrendered our weapons,” Trump said at one point about Biden.

Trump also reminded the crowd that “Joe Biden was going on vacation as Afghanistan was going to hell,” pointing out that “this is what yay get when you have weakness in the White House.”

A particularly headline grabbing moment of the speech came when Trump addressed wokeness, particularly when it comes to General Mark Milley, the Chairman of the Joint Chief of Staffs. General Milley has garnered particular attention for defending Critical Race Theory. “I want to understand ‘white rage,’ and I’m white, and I want to understand it,” he said during a House Armed Services Committee hearing in June, as Spencer reported.

Trump invoked the great General George Patton then, asking the crowd if he was “woke.” Offering his own thoughts, Trump emphasized “I don’t think so. I don’t think he was too woke. He was the exact opposite. You know what woke means. It means you’re a loser. Everything. Everything woke. It’s true. Everything woke turns to shit, okay.”

Such a line, in addition to appearing in numerous headlines, also resulted in thunderous applause from the crowd, as well as chants of “USA!”

Say what you will about Trump’s rhetoric, but this is certainly one instance where he’s saying out loud how the American people really feel. It was a particularly rousing part of Trump’s speech, with plenty of booing about President Biden, as well as cheers and applause at other relevant moments.