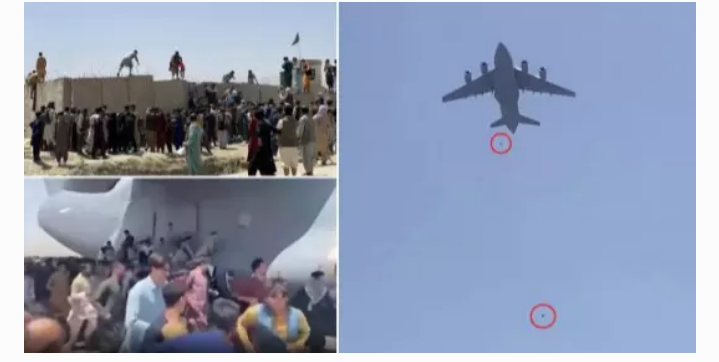 In the videos, objects that various outlets reported are people can be seen falling from planes as the aircrafts ascend hundreds of feet into the sky.

According to the Daily Wire, myriad outlets including Newsweek, the Daily Mail, and more reported that those objects falling from the planes were, indeed, people.

The outlet reported that the hysterical mobs forced the U.S. military to use helicopters to “clear people off the tarmac so the planes could take off.”

Insider reported that other photos “depict the bodies of people who had reportedly fallen onto the roofs of buildings in the Afghan capital from planes they attempted to stowaway on.”

“Locals near Kabul airport claim that three young men who were holding themselves tightly in the tires of an airplane fell on top of people’s houses. One of the locals confirmed this and said that the fall of these people made a loud and terrifying noise,” Afghan news agency Asvaka News tweeted alongside a graphic photo of a person’s dead body. The agency also tweeted a video of onlookers examining the person’s body.

One social media user tweeted a particularly disturbing video showing a small crowd of people huddled on the side of one of the aircrafts, and captioned it, “No words can describe these scenes.”

Later on Monday morning, U.S. reportedly suspended all flights at Kabul’s Karzai International Airport in order to clear the airfield.