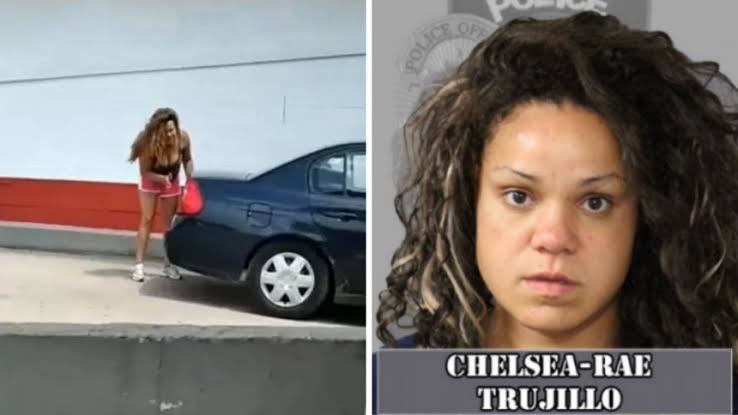 The Pueblo Police Department arrested a woman accused of trying to put her child in the trunk of her vehicle in Colorado.

Authorities said 33-year-old Chelsea-Rae Trujillo was allegedly spotted attempting to put her five-year-old son in her trunk outside a business located in the 1900 block of N. Norwood Ave., KRDO reported Thursday.

A witness captured video footage of the incident and police shared it with the outlet.

In the clip, a woman was seen leaning

Advertisement
over the trunk of her car while a child was heard screaming. The woman yelled something before shutting the lid.

The person behind the camera then confronted the woman and told her she could not put the child in the trunk.

Pueblo Police detailed the initial events in a news release on Thursday:

On August 4, 2021 at approximately 2:20 p.m., Pueblo police responded to the 1900 block of N. Norwood Avenue regarding a possible child abuse. Police received information that a woman, later identified as 33-year-old Chelsea Trujillo, was forcefully placing her 5-year-old male child in the trunk of her vehicle. Officers attempted to locate Trujillo in several locations. She and her child are currently homeless. They were last seen in a mid-2000s blue Chevy Malibu with no license plates.

In a social media post Thursday evening, the department said Trujillo and her son had been located.

“Trujillo was arrested on child abuse and restraining order violation. Thank you to everyone who assisted on this case,” the post read:

33-year-old, Chelsea Trujillo and her son were located by Pueblo Police. Trujillo was arrested on child abuse and restraining order violation. Thank you to everyone who assisted on this case. pic.twitter.com/T8QM81dtGK

Officials told KRDO the boy was found safe and had no apparent injuries.

“See, I think anybody that looks at that video would be concerned about the welfare of that little boy. We saw what we saw in the video, but we need to look at the whole thing. That’s why detectives are involved,” Sgt. Franklyn Ortega of the Pueblo Police Department told KOAA.