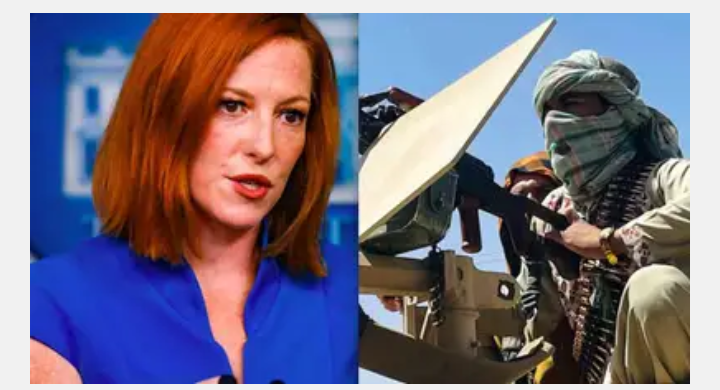 White House press secretary Jen Psaki is “out of the office” this week while President Joe Biden vacations at Camp David — all while Afghanistan rapidly falls to the Taliban in a stunning takeover, Fox News reported.

The cable network said it sent questions to Psaki’s White House email address Sunday morning and then tried to reach her once again Sunday evening — and each time received the same auto-reply: Psaki wouldn’t be available this week.

“I will be out of the office from August 15th-August 22nd,” Fox News said the auto-reply read. Others received the same auto-reply: To confirm Fox reporting – We asked Biden Press Secretary Jen Psaki for comment about Afghanistan. Here the actu… https://t.co/LszzkKUM2s

Although Biden is on a scheduled vacation, Republicans ripped his absence amid a colossal disaster in a country that was the primary focal point following the Sept. 11, 2001, terror attacks in the United States — a month shy of 20 years ago.

“Joe Biden has been commander-in-chief for seven months — the current failure in Afghanistan falls squarely on his shoulders,” Rep. Kevin McCarthy (R-Calif.) said. “His lack of leadership during this pivotal moment has been shameful — it has only served to embolden our adversaries and let down our allies.”

Indeed, Afghanistan President Ashraf Ghani fled to Tajikistan, the presidential palace in Kabul on Sunday was “handed over” to the Taliban, and U.S. diplomatic members were forced to evacuate the U.S. Embassy in Kabul on helicopters — a scene that drew comparisons to the fall of Saigon

What did folks have to say about Psaki?

Psaki’s absence only added fuel to criticism of the Biden administration’s handling of the crisis: World watches a collapse of 20 yrs of US involvement in Afghanistan and WH takes vacation. I guess she will “circl… https://t.co/mYW8UrxQfC

1629095859.0 Jen Psaki took a week off when she realized that “circling back” to questions about why America just took the bigge… https://t.co/sBo8dwSJE1

Biden issued a Saturday statement placing blame on former President Donald Trump for the Afghanistan debacle — after which Trump blasted Biden, saying the current commander-in-chief “gets it wrong every time on foreign policy.”

It’s also been reported that Biden will address the American people on the Afghanistan situation in the “next few days.”