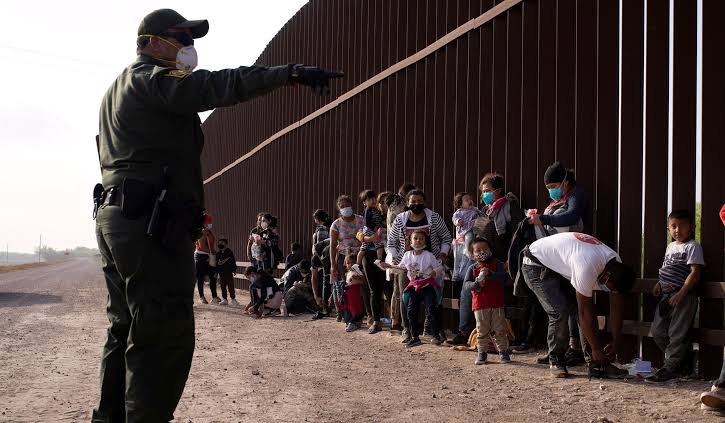 The Biden administration’s rollback of its predecessor’s hardline immigration policies has culminated in the tripling, quadrupling or even quintupling of detentions of migrants in some sectors of the US-Mexico border, with apprehensions currently on track to reaching their highest level since the year 2000.

“The United States will soon be considered a Third World Nation. There has never been anything like what is happening at our border. Millions of people have already poured in, but many more than that are coming,” Trump said in a statement released late Monday.

The comment echoes comments he made a day earlier, when he suggested that the US was “rapidly becoming a cesspool of humanity” and that the illegal aliens making their way in were “totally unchecked and unvetted,” and “can do whatever they want, and go wherever they want”.

Trump alleged that “murderers, drug dealers, and criminals of all shapes and sizes” were streaming to the US from South America, Haiti and African countries, echoing remarks he made in 2015 when announcing his candidacy for president, when he enraged liberal media by accusing Mexico of sending the dregs of their society to America.

“They’re bringing drugs, they’re bringing crime. They’re rapists and some, I assume, are good people,” the real estate mogul said at the time. Trump’s comments brought him notoriety, but also gave him billions of dollars in free television airtime and saw him shoot up to the lead in the Republican primaries.

The former president’s remarks come amid a new development in the border crisis story – the discovery of an encampment of thousands of migrants from Haiti under a bridge near the Del Rio, Texas border crossing. Haitian nationals have been flocking to Mexico in the tens of thousands and making their way across the border into the US, hoping to get asylum, following last month’s devastating earthquake, and the July assassination of President Jovenel Moise by US and Colombian mercenaries. Amid the crisis, the Biden administration recently reversed course on its ban on the expulsion of Haitian migrants, with deportation flights starting Sunday.

On Monday, a group of 26 Republican governors demanded an urgent meeting with President Biden over the situation at the border, suggesting that the dramatic surge in border crossings has created an “international humanitarian crisis.” The governors are seeking an “open and constructive dialogue regarding border enforcement on behalf of US citizens” in their states “and all those hoping to become US citizens.”

The governors’ letter mentioned some sobering statistics, including reference to a 500 percent surge in border apprehensions last month compared to the same period in 2020, and the discovery that 9,700 of those detained had a criminal record in their country of origin. The officials also found that border agents had confiscated more fentanyl this year than in the three previous years combined.

Last week, Customs and Border Patrol reported that over 209,000 migrants were apprehended on the US southern border in August, down from 213,500+ in July. CBP figures indicated that over 1.5 million illegal immigrants have been apprehended since the start of their fiscal year in October 2020, with the figures on track to matching the record 1.7 million apprehensions recorded in the year 2000.

The crisis at the US-Mexico border began to take shape almost immediately after President Joe Biden stepped into office and signed off on a series of policies to walk back Donald Trump’s hardline immigration policy. Biden scrapped Trump’s much-touted border wall, promised to end “harsh and extreme immigration enforcement” and to “restore and expand” the US asylum system, hinted at offering a “path to citizenship” to the estimated 11 million illegal immigrants already living in the US, and scuttled the ‘Remain in Mexico’ programme, which required immigrants applying for residence status in the US to wait in Mexico while their application was processed.

Mexican President Andrese Manuel Lopez Obrador and Guatemalan President Alejandro Giammattei have accused the Biden administration of fueling the border crisis via its “lukewarm” rhetoric on illegal immigration, and suggested that Washington’s policies has fueled human smuggling and other crime. Others, including some Congressional lawmakers, have pointed out that the crises facing Latin America today are the result of decades of US meddling in the region – including invasions, the staging of coups and the toppling of countries’ democratically elected presidents.