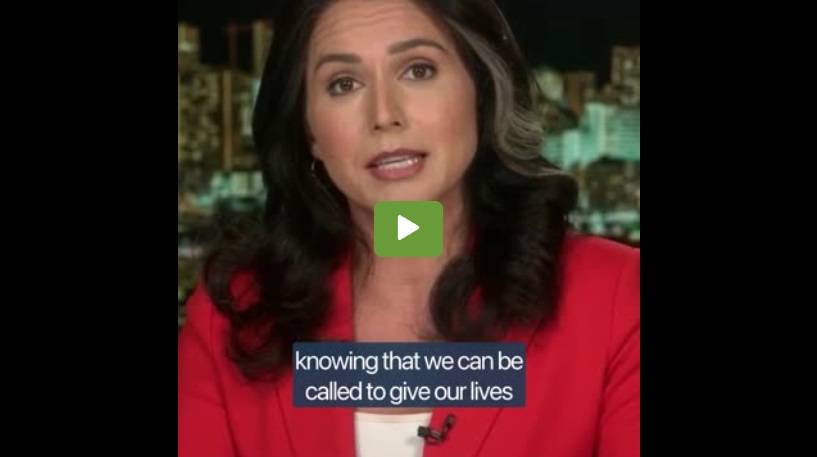 When powerful, influential people make baseless accusations of treason, they are sending a message to all Americans: if you dare to criticize the establishment’s narrative, you will be smeared and discredited. If this is allowed to continue, our democracy will be no more.

Get it right, Tulsi.. You can say it… The Constitutional Republic. America is a Republic;

I’m not sure she even understands she’s out of office…after all, she never seemed to know what office to report to.
I mean she says some good things, but she’s still all over the road more than a ’63 Corvair…;

Yeah, Tulsi, it is in horrific danger. Would you like to say something about electoral fraud not being given a court case?;

@fitzwilliam She still serves in the Military, so their charges are VERY serious. While I disagree with nearly every policy position she’s taken, I admire her tenacity & her love of our nation. It’s NOT surprising that Romney is so vocal about her, as his son is one of the ppl who has such lucrative deals over in Ukraine. MORE ppl need to speak up about the war crimes being committed by the dictator, Zelenskyy, and all the horrific things he has done AND have been well documented over the past 8 years. The mere IDEA of us sending over US Troops to SERVE WITH NAZI Azov Battalions makes me sick;

tom hoser, you will soon realize that this is the beginning of Gabbard’s 2024 presidential campaign. She was hand selected by Klaus Schwab to be one of the globalist candidates for 2024;

@Tomhoser Tulsi Gabbard’s military service is a farce. Anyone who has served knows her National Guard service is a political stunt. Her view on the 2nd Amendment makes her one of the most unqualified people in the United States for political office: Viewers’ Comments.