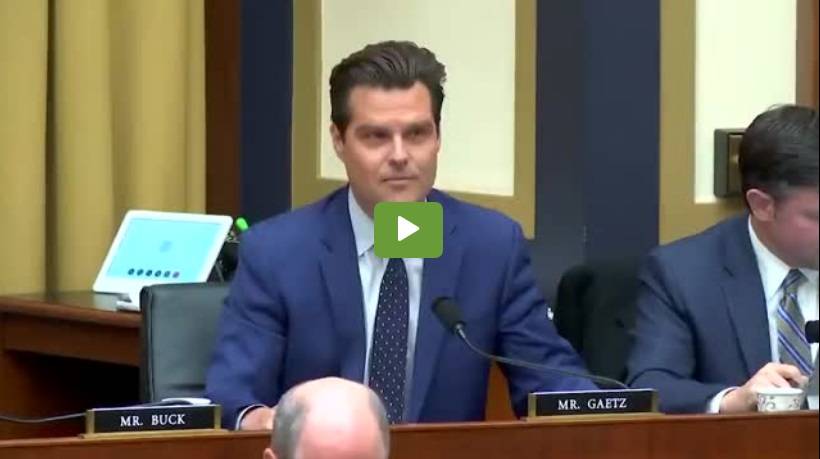 I can’t recall a single instance of a Republican grilling an unelected bureaucrat like this and it leading to any semblance of accountability. So the supposed big “gotcha” moments like this (that we’re supposed to be high-fiving ourselves about) only emphasize who really has the power. It’s always the quiet voiced polite bureaucrat who seems waaaayyy more powerful than the angry Congress critter grilling them, because they ARE more powerful. Because they can ultimately just play dumb and tell Congress and certainly the American people to just go f**k off. The FBI is only holding onto the laptop stuff as a means of controlling Biden, they are interested in their power alone. The various deep state agencies are full on traitors, and are themselves the far bigger threat to American citizens than any foreign government;

Gaetz is a power hitter. The good thing about this is it is being clearly exposed for all to see. American citizens are in the process of waking up and taking our country back;

I have watched this so many times- it never gets old! Nice one Mr. Gaetz!!;

IMO I have serious reservations that this administration is anything other than massively corrupt. Amazes me how all this illegal activity within the Brandon family goes unchecked. Quid pro quo, money laundering, illegal drug use, prostitution, illegal gun purchasing, lying on federal firearm forms, and it goes on and on. All inside the POTUS closed family house;

Nadler is a douche, and the FBI guy is also. Both don’t know how to do a job;

Get a haircut, put on a tie and your qualified to run any of the intelligence agencies.
This just sad and pathetic. We have the most dishonest, disingenuous liars and thieves running these agencies. They have and will break the law to further their careers no matter how much damage it does to OUR County. Makes me sick: Viewers’ Comments.