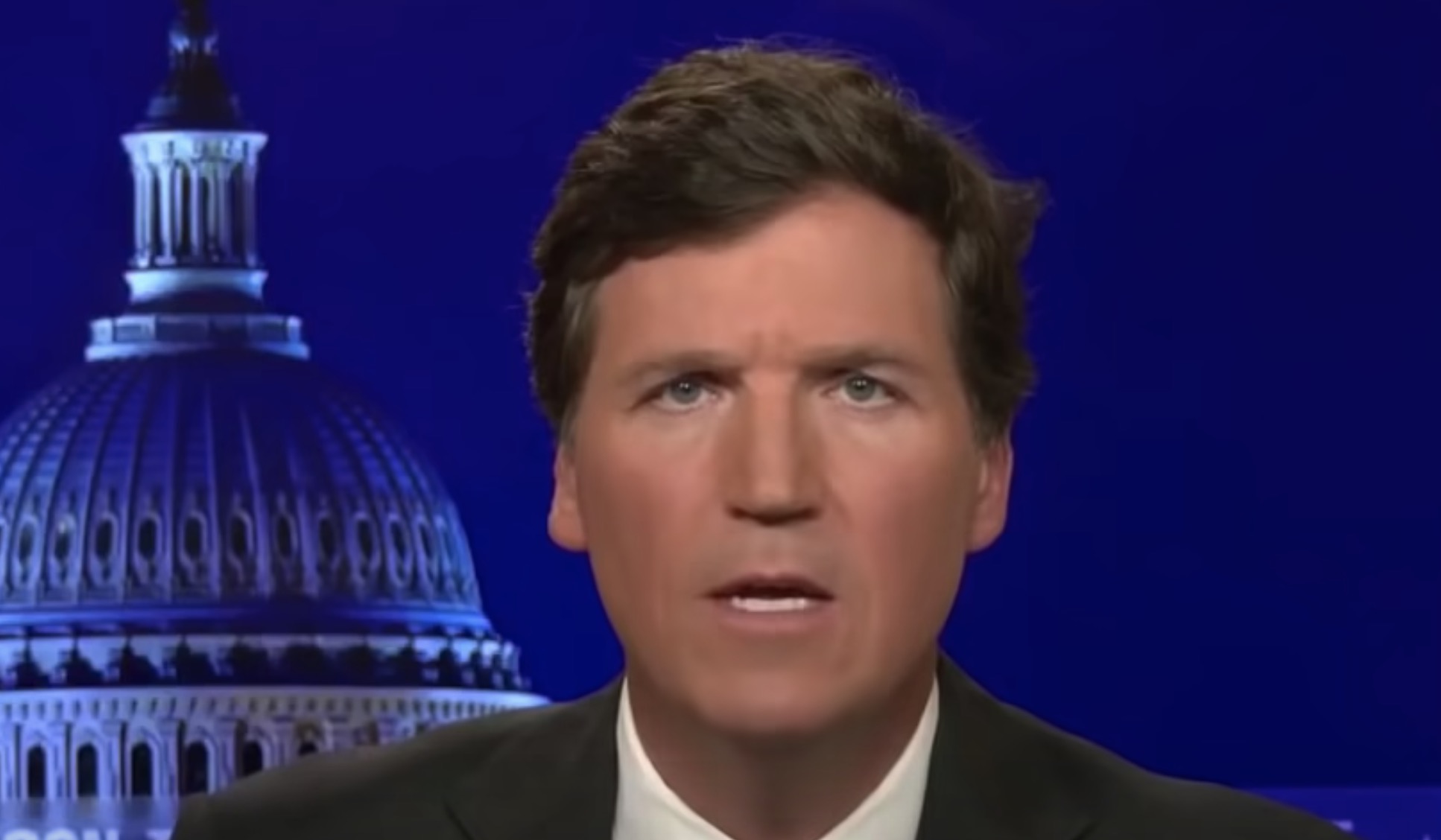 Carlson said, “You don’t see people hiding bombs, or using bayonets, or firing weapons trying to take over the country with an insurrection.”

“You see people walking around and taking pictures,” he continued. “They don’t look like terrorists, they look like tourists.”

“If you look at the guy in the Viking horns, the Chewbacca guy, you may reach the obvious conclusion maybe Psilocybin mushrooms aren’t good for you,. And that’s fair,” he said.

“But no honest person could look at that video and decide America is under attack from terrorists.”

“Surveillance footage shows a squad of people, dressed in all-black, systematically entering the Capitol and kicking open one of the exterior doors on the Senate side,” Carlson explained. “They appear to be well-trained and coordinated. They’re not high on hallucinogenic mushrooms.”

“The question is, who are they? And why don’t we know their names? And why aren’t they dressed like any of the other people in the footage that’s just been released?” Carlson sasked.

Things that make you go… 🤔 https://t.co/vSIuVTVA7u

“We still don’t know how many federal agents were involved in the events that day, but we have reason to believe from court documents that it’s a significant number,” he continued.

“And here’s one clue: at a recent rally in Washington, the feds managed to arrest one of their own undercover agents,” he said. “How many undercover agents? There were so many feds at the event, that they lost track of each other, and arrested one of them. So we ask again: how many federal agents were there on Jan. 6? Why can’t we know?” Carlson asked.

“What is clear is that, once again, this footage reveals that the first draft of history was a lie. An intentional distortion. A mirage created to control you,” Carlson said.

In conclusion, Carlson said, “So here’s a rule of thumb going forward if you ever watch television again or read the newspaper: When they are absolutely insistent that you believe something, when they keep beating you over the head with the same talking point again and again, beware. There’s a reason they’re saying that.”

“When all of them are using exactly the same line, maybe there’s a reason for that. Maybe it’s coordinated. Maybe they’re lying.”

“That’s a common theme for virtually everything that happens in the news right now. Something happens, you’re not exactly sure what the outline is, you don’t know all the facts, nobody does, and all of a sudden, they hang a story on it that helps them politically, and they ram it down your throat day after day,” he added. “It used to be called propaganda. Now it’s so ubiquitous, I don’t know what to call it.”

That video got to me, too. Glad Tucker is drawing attention to it.

The Democrats have pushed a false narrative about the Jan. 6th Capitol riot.

The Left argues the events of January 6, 2021 were an organized attempt to overturn the presidential election result by militia groups and those directly around President Donald Trump.

However, an investigative report by the FBI has confirmed the events of Jan. 6th at the U.S. Capitol were not “the result of an organized plot to overturn the presidential election result.”

“FBI at this point believes the violence was not centrally coordinated by far-right groups or prominent supporters of then-President Donald Trump,” the report says.

“The FBI has so far found no evidence that he [President Trump] or people directly around him were involved in organizing the violence, according to the four current and former law enforcement officials,” the report adds.

On the contrary, there is strong evidence that virtually all cases were “one-off incidents” and very few, if any, incident could be tied to various militia-type groups. Moreover, these groups were still not centrally coordinated.

A former senior law enforcement official with knowledge of the investigation explained this information to Reuters.